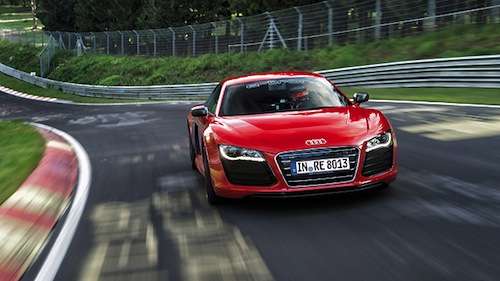 There are many reasons why the world is buying German flagship cars like BMW, Mercedes-Benz, Audi and Porsche at record numbers. They are what people want.
Advertisement

BMW, Mercedes-Benz, Audi and Porsche are all experiencing record sales numbers this year with their luxury and high-performance brands, and this is at a time when gasoline prices are up and most buyers worldwide are cutting back. Logically this doesn’t make much sense, but the German brands are doing very well selling their premium cars and expensive performance cars with powerful engines.

According to an article by CNN Money, in the first five months of this year, BMW's global sales are up 6.4%, Porsche has gained 13%, and Audi is a remarkable 14% better off. Buyers worldwide are scooping up the luxury German brands at record levels and they are forecasting even better sales numbers for 2013. But there are ten good reasons why, according to CNN Money, that our German friends enjoy a unique advantage.

1. A long History to draw from
The Germans have been building cars longer than anyone else. Karl Benz patented one of the first internal combustion engines back in the 1879. In 1886 he received a patent for his first automobile. The Germans have been at this thing for a long time and they love their cars.

2. Racing success
The Germans have a rich and storied racing history. And the famed Nurburgring that is nicknamed the “Green Hell’, is where legends are born. The Germans know that technology is developed at the track before it makes its way to production vehicles.

3. The Autobahn is for driving enthusiasts
The German autombahn is the only place in the world where you can be driving 100 mph and get passed by a Turbo Porsche Carrera going 150 mph legally. The German manufacturers limit their cars to 155 mph, but their cars are built to go fast.

4. Top Brand recognition
The Germans have built one of the top brands in the world. Even with Audi’s poor reputation for quality in the 80’s, they have rebounded with a strength that matches the other three. Everyone knows what the German brands represent in luxury and quality.

5. Technology is supreme
CNN Money notes that "Engineers occupy a high pedestal in a country that prizes technology and craftsmanship." Just look at the diesel engine that the Germans perfected for their passenger cars. The world is just beginning to catch up with this fuel-efficient technology.

6. Give people what they want
The Economist says, "It's quite simple really, Germany makes things which people in countries with growing economies want to buy." Audi sales are up 44.2% in China while BMW leapt ahead 31.5%, and both companies are growing faster than the overall market in the U.S. They are marketing their cars to the right buyers.

7. A confident attitude
The Germans aren’t afraid to tell us what they are about. Mercedes says they are “The best or nothing.” BMW, “The ultimate driving machine.” Maybe they are arrogant, but they are confident in what they are selling. As one Zurich newspaper put it, “cars are as central to Germany as secret bank accounts are to Switzerland.”

8. Price matters
Price is very nearly the object. CNN Money says "Sometimes, how much you pay for something – as opposed to its function – is the point of the exercise." Paying $137,500 for a 2013 Turbo 911 and then an extra $330 charge for a Porsche logo on the center console lid of a 911 is a good example.

9.Ultra exclusive cars
If a regular $47,000 5-series BMW doesn’t have quite enough power, buyers can get a specially equipped M5 for $90,695. Mercedes has its AMG high-performance cars that can take a C-Class coupe and turn it into a $125,000 ultra performance supercar.

10. German cars are number one
Lastly, BMW, Mercedes-Benz, Audi and Porsche are generally thought of as top brands in the automotive world because they are. Despite valiant efforts by Cadillac and Lexus to build cars that can keep up with the Germans, they simply can't compete at the same level.

RICHARD MATTHEWS wrote on September 23, 2015 - 7:16pm Permalink
Change this line: 5. Technology is supreme CNN Money notes that "Engineers occupy a high pedestal in a country that prizes technology and craftsmanship." Just look at the diesel engine that the Germans perfected for their passenger cars. The world is just beginning to catch up with this fuel-efficient technology. 5. Technology is a lie
Ken Gorin wrote on October 23, 2019 - 10:06am Permalink
I’m happy to see that Audi and Porsche are getting the recognition that’s long overdue! These are great vehicles that will stand the test of time.

Panasonic Updates Profit Forecast, Noting How Much Tesla Batteries Help The Jump
2022 Porsche 911 GT3 Laps Nurburgring in 7:04 With Journalist Behind The Wheel
END_OF_DOCUMENT_TOKEN_TO_BE_REPLACED