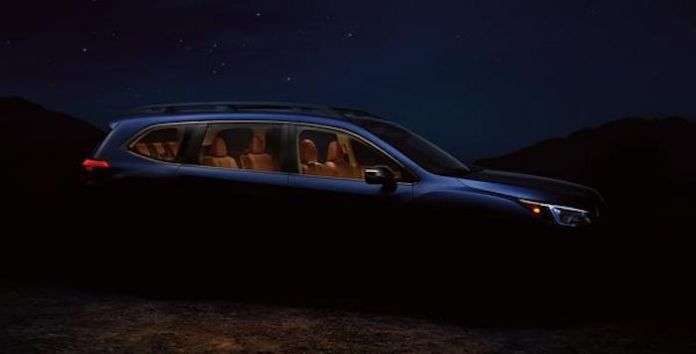 The all-new 2019 Subaru Ascent will make its global debut at the Los Angeles Auto Show during the press launch at the Subaru booth.
Advertisement

Subaru of America just released another teaser of the the new Ascent family hauler. It’s coming to the LA Auto Show. The new 2019 Subaru Ascent 3-Row Crossover will be Subaru’s entry into the large crossover segment in the North American market and replaces the Tribeca.

The new Ascent teaser above shows the interior lit up from the cabin lights inside and it’s a preview of the largest vehicle the Subaru brand has ever produced. The new 7-or-8 passenger Ascent (depending on options) allows Subaru to enter a whole new large vehicle segment they’ve been missing until now.

Subaru is expecting their current customer base of young millennial families to move up in size as their family grows, and the all-new Ascent will be the answer. Subaru is also expecting a large number of Ascent buyers to be conquests from other brand’s vehicles’ like the Toyota Highlander, Mazda CX-9, Ford Explorer, Chevy Traverse, Dodge Durango and Jeep Grand Cherokee.

Here’s some details ahead of the LA show

The new 3-Row Ascent is being designed specifically for U.S. and Canadian families with active lifestyles. We just recently reported here on Torque News, the Ascent will be powered by a new twin-turbo 2.4-liter four-cylinder boxer engine specifically designed for the new crossover. It will be more powerful and fuel-efficient than their current 2.5-liter four-cylinder powerplant.

The new 2019 Subaru Ascent will come in four trim levels

The all-new 2019 Subaru Ascent will make its global debut at the Los Angeles Auto Show (December 1-10) during the press launch at the Subaru booth on November 28. Stay tuned.