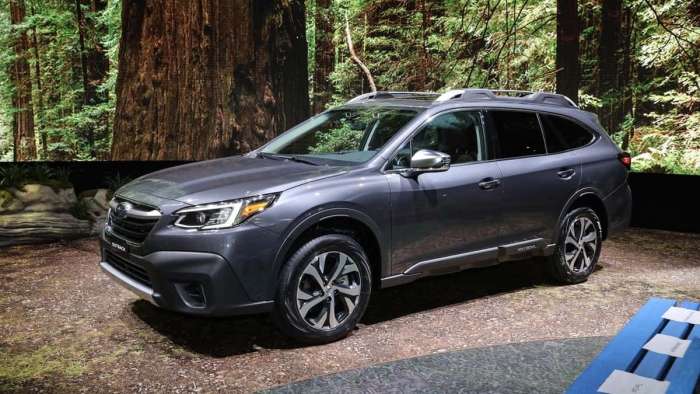 Subaru Says Look At New Outback Not Scandals And Recalls

The new 2020 Subaru Outback is coming on the heels of scandals and multiple recalls. Can Subaru survive them?
Advertisement

The Subaru brand has survived a tough year of scandals and recalls but has emerged on the other side determined to bring value to its customers. The all-new 2020 Subaru Outback shows where the brand is heading with new safety features, more fuel-efficient engines, improved ride quality, and more adventure for outdoor enthusiasts.

Subaru has acknowledged they have come through a rough 12 months as Torque News reported Subaru Corp had to shut down their plant in Gunma, Japan for 10 days at the end of the year for a power steering problem with Forester, Crosstrek, and Impreza. Reuters reports Subaru’s last 12 months have been “dismal” quoting Subaru’s Chief Financial Officer, Toshiaki Okada saying: “Quality and production issues slowed output, which led to the drop in sales.”

We also reported Subaru of America issued a recall last fall and stop-sale for all U.S.-built 2018 Outback and Legacy models totaling 228,648 vehicles because of a software programming error that can cause the low-fuel warning light to fail to illuminate.

To make things worse, Subaru Corp issued a massive global recall where 2.3 million vehicles were recalled because of a brake light switch malfunction. A total of 1,303,530 vehicles in the U.S. were affected by this recall.

Before that, there was another global recall of 411,000 vehicles to fix faulty valve springs that can cause the 2.0-liter engines to stall in the Subaru BRZ, Crosstrek, and Impreza models. And that came on the heels of Subaru’s recalling a half-million vehicles in Japan to address a problem of cheating on final vehicle inspections.

To signal a new beginning, On April 17, Subaru unveiled the all-new sixth-generation 2020 Outback SUV/Crossover at the New York International Auto Show for customers. Subaru Corporation wants customers to look at where they are going with their next-generation vehicles and not where they have been the past year. It’s been a rough patch for the Japanese automaker who is determined to bring value and not more scandals and recalls in 2019.

You May Also Like: The Safest Cars Aren’t The Most Expensive, Subaru Forester Rated 2nd Overall

Digitaldoc wrote on May 11, 2019 - 11:42am Permalink
And yet somehow, their sales continue to increase. Just shows that good marketing can overcome bad automotive engineering! One day Subaru customers may figure it out...
CajunMoses wrote on May 12, 2019 - 12:39pm Permalink
L - O - V - E . It's what makes a Subaru, a Subaru.
digitaldoc wrote on May 13, 2019 - 2:53pm Permalink
Well, it is certainly not the inspired engines and horsepower that make them so great.
Randolph Stroup wrote on May 11, 2019 - 3:48pm Permalink
I recently purchased a 2019 Outback, and it is absolutely fabulous.
Jim wrote on May 13, 2019 - 4:42pm Permalink
The key word is "recently bought"waits few months and you will find your windshield cracking by itself- $800 PLUS a few hundred for the reprogryof the Eyesight, transmission problems and NOTE THAT THERE IS EXCESSIVE OIL CONSUMPTION, Subaru solution is changing the oil change from 7500 miles to 6500, that's not a solution to the problem just another added expense in synthic oil changes at $79 a pop. I have NO LOVE for Subaru anymore
Gerald Johnson wrote on May 11, 2019 - 10:23pm Permalink
Remember when Ford boasted about "Quality is Job 1"? Perhaps Subaru should boast about "Quality is Job 2"? Faulty valve springs? Are you kidding me? They might just as well say, "Our engines suck." Forget all the "love" ads...and build a car right.
Jim wrote on May 11, 2019 - 10:55pm Permalink
I own a 2015 Subaru Outback, I have 50k on the car and all highway miles. I had the right side front axle replaced, transmission replaced - with a remanufactured, rear hatch motor replaced along with struts 2 times, now I'm waiting for a new radio head unit- they ordered the incorrect radio, its been over 2 weeks , still no radio. I would newer buy another Subaru
Tom Reeves wrote on May 12, 2019 - 2:01pm Permalink
My 2015 Outback is fabulous. I am aiming to get 250,000 miles out of it. By the way, Consumer Report ranks Subaru the best automobile manufacturer in the world.
Jim wrote on May 13, 2019 - 4:46pm Permalink
Consumer Reports also rated the Chevy Vega and Ford Pinto great cars. Plus the Vega was awarded car of the year by Motor Trend even after they found the engines blew up
Rabi Pal wrote on May 12, 2019 - 4:17am Permalink
Don’t trust this brand, I have 2018 outback 3.6R, it’s very unreliable vehicle , it can break down / stall your vehicle any time anywhere .. I already has 3 safety recalls , radio ( infotainment ) replaced , radiator fan & coil burnt up at 65•F weather, at just 24K miles on it.. extremely worrying about what will happen after warranty over (> 36k miles ) , all cost I have to bear from my pocket. And claiming warranty service is very poor, it took 2 months to send me radio unit replacement . Think twice .. think wise .. if you have good budget choose other brands or in the same price you look for Mazda or Kia. I would not buy Subaru in my life if I able to sale it on a suitable price.
Richard Joash Tan wrote on May 13, 2019 - 3:17am Permalink
And your comment is the worst comment I have ever seen because I will buy a new subaru ever again. And also you will be banned from every social media site for the rest of your life.
Nancy R wrote on May 12, 2019 - 8:55am Permalink
Waiting for the windshield recall! 2018 Outback with 9000 miles windshield cracked down the middle for no apparent reason. Dealer told me this is a common problem however my warranty does not cover it. $800 to replace windshield and $300 to reprogram i-sight. Awful, just awful!
Motherofa17yearold wrote on May 12, 2019 - 9:03am Permalink
I wish that last line in the article read that the automaker is determined to bring safety instead of it saying value. That word makes me squeamish.
Crankpaul wrote on May 12, 2019 - 12:13pm Permalink
I own a 2011 Outback since new. 101,000 miles and nothing more than routine tires, oil/filter, brakes, wiper blades. I'd buy another in a heartbeat if I were in the market. OTOH this car is still good looking and great driving so there's nothing in the horizon as a replacement, Subaru or otherwise.
Bobby wrote on May 13, 2019 - 1:36am Permalink
Our 2018 3.6R outback display panel, Radio, navigation is dead. Dealer had hard time figuring what went wrong. Should I stop making payments?