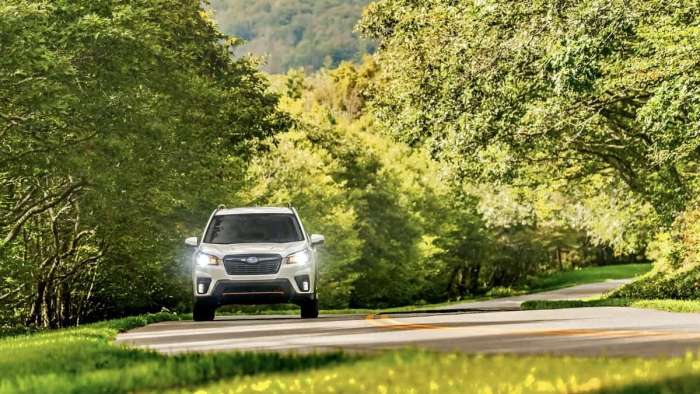 You don’t have to buy a luxury vehicle to get the safest SUV.
Advertisement

Consumers looking for the safest SUVs don’t have to spend a lot to get one. The Subaru brand offers an affordable lineup of all-wheel-drive SUVs that rank highest is safety. Subaru beat 29 other manufactures in a new survey to take the number one spot. It was customers who rated the Subaru brand highest among all automakers in the UK. Subaru was voted Best Manufacturer for Safety Features in the 2019 Driver Power Survey, and the newly-redesigned 2019 Forester ($24,295) is the number two vehicle overall among 100 cars ranked for safety by customers who drive one.

Steve Fowler, Auto Express editor-in-chief said: “Subaru has long been known as a maker of tough, well-built, all-wheel-drive models. More recently, Subaru has placed its EyeSight system at the heart of its model range. The feature is a well-judged package of safety systems powered by a pair of cameras to scan the road ahead. This year, owners have consistently praised Subaru’s safety credentials in our Driver Power survey, placing the manufacturer ahead of some far-larger manufacturers.”

Subaru leads all automakers in the U.S.

The Insurance Institute for Highway Safety (IIHS) says Subaru leads all automakers in safety performance. The IIHS announced the Subaru brand has achieved TOP SAFETY PICK+ awards on seven of their 2019 models, more than any other automaker. Subaru’s win streak of top IIHS safety picks goes back over a decade, and Forester extends its title as the longest running TSP winner in the small SUV category with a record 13th win.

The 2019 Subaru Forester, Crosstrek, and Outback also hold the maximum 5 star Euro NCAP safety rating. All three models are fitted with a host of safety features, including EyeSight driver assistance, as standard. Customers looking for safety don’t have to buy a luxury vehicle to get it.

You May Also Like: Check New IIHS Safety Ratings Before You Buy; Subaru Leads All U.S. Brands

Khairul Annuar ... wrote on May 5, 2019 - 7:22am Permalink
Subaru outstanding safety features durability realiability robustness and versatility had always been the hallsmark . It has been my most preffered brand amongst the great Japanese make.
Shaun wrote on May 5, 2019 - 7:42am Permalink
This is not true. Subaru is the worst brand of SUV for me. I regret having one. Please stop writing articles that are misleading. Have you actually driven one?
Tom Brown wrote on May 5, 2019 - 2:47pm Permalink
Yes Shaun, I've actually driven one. I bought a 2018 Outback new and drove it 3000 miles around the SW. last summer. Performed flawlessly. The 6 cyl. got 26 MPG @ 80 MPH all the way across TX,, (Houston), and back to AZ. Got 12,000 miles on it now, nothing not to like so far.
Sidd wrote on May 5, 2019 - 3:52pm Permalink
I was contemplating buying one. Can you please let me know what complaints do you have from your Subaru? And do you drive a Forester?
Jesse wrote on May 6, 2019 - 5:19am Permalink
I own a 2018 forester convince model. Straight up short and honest. The interior is cheap. The engine and handling is amazing. Very torquey and nimble. I was always a Honda guy. Now after a year of driving the forester. I will never go back. I will be giving the forester to my daughter in 3 years for her sixteenth and doing what I've always wanted to do a long time ago. Buy the STI for myself. I highly suggest getting the forester.
Jack Stephens wrote on May 5, 2019 - 9:40pm Permalink
I sold my Nissan Pathfinder and replaced it with an Outback. Best swap i ever made. To be fair, i have the 3.6R engine. I wouldn't want to own the normal 4 cylinder .
David wrote on May 6, 2019 - 3:16am Permalink
I have...... Love my Outback!
Dalton wrote on August 11, 2019 - 11:03pm Permalink
I completely disagree with you. I have found them to be exemplary and so have many people I know who own them.
Christopher Geke wrote on May 5, 2019 - 4:04pm Permalink
I happen to own a legacy and if I were to purchase a car I'll purchase a car I'll purchase a Subaru and if I were to purchase another I'll purchase a Subaru.It has the most wonderful performance on and offroad.
Jack Stephens wrote on May 5, 2019 - 9:38pm Permalink
A couple of years ago the EyeSight system saved my butt big time. I was late to work and there was an important conference call starting. I began trying dial in to the conf call on my phone -- struggling to punch in all the numbers. A flat bed truck -the type that carries cars -- pulled into my lane and hit the brakes. While i was looking down i heard the beep beep beep of the system and it immediately hit the brakes. I looked up and saw the slim bed of the truck ready to slice right into my windshield at about eye level. I don't like to think about the wreck that would have happened if i didn't have EyeSight.
james wrote on May 8, 2019 - 9:20pm Permalink
if you want a luxurious vehicle, do not buy a Subaru. I have an 04 forester and the darn thing is a sherman tank. It is not pretty, in fact it is boxy. And it doesnt take curves very well. If I wanted a race-car, I would buy a different car. But, it survived running over a large truck tire left on a road in a poor maryland neighborhood outside of DC. It tore up my exhaust. Per my reading, many Subaru's need head gaskets after 100k and periodic timing belts. I lost my trans too. If you drive a lot, the miles will wear out any car. But, guess what? when it is a blizzard outside you can still get around! A very safe and dependable vehicle. just dont grumble or curse when you need maintenance. In short, my soccer-mom SUV is very dependable.