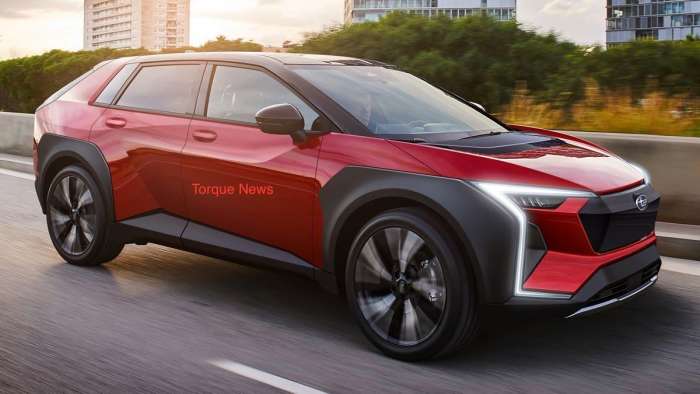 Toyota announced it's first battery-electric SUV for the U.S. market. What does it mean for the new 2022 Subaru all-electric SUV?
Advertisement

Torque News obtained permission from motor.es to use their excellent rendering of the all-new 2022 Subaru electric SUV above. It depicts what the new Subaru "Evoltis" could look like when it arrives. While we don't know if Subaru will use the name "Evoltis" for the new BEV, the Japanese automaker has a new nameplate patent.

With Toyota's announcement for its first battery-electric SUV this week, Subaru's new BEV is coming into focus. We know it will likely ride on Toyota's e-TNGA platform, a derivative of the Toyota New Global Architecture (TNGA). 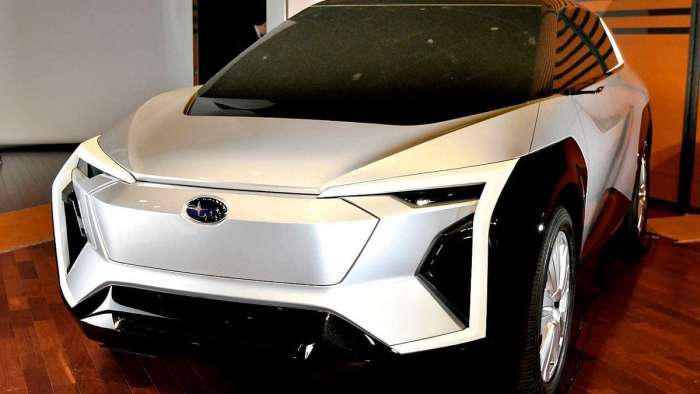 Subaru will use it to support its all-wheel-drive vehicle, and according to the Japanese automaker, it could also come in the front-drive configuration. Kazuhiro Abe, Subaru's vice president for product planning, says the new BEV could use a front-wheel-drive structure with one motor and an all-wheel-drive variant with two motors. 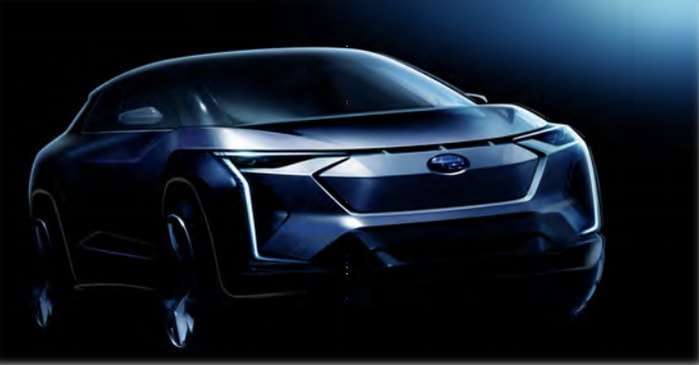 The U.S. takes priority over other global markets

He also told AN, Subaru Corporation is putting a priority on the U.S. market and its customers. Because the automaker sells 66 percent of all its cars in the U.S., the new battery-electric will arrive on U.S. shores first.

Subaru will likely follow Toyota's lead in its slow and cautious approach to converting its overall fleet to all-electric technology. Subaru will also rely on hybrid technology and has announced they will have an "electrified" lineup by the mid-2030s. The plan will include hybrids, plug-in hybrids, and its all-electric model.

Subaru is not expecting all-electric demand in the U.S. to increase anytime before the mid-2030s. "I don't know when, but EV demand will expand sometime," Abe said. "We think it will expand a lot. Maybe not in the early '30s, but maybe from the late '30s or '40s." 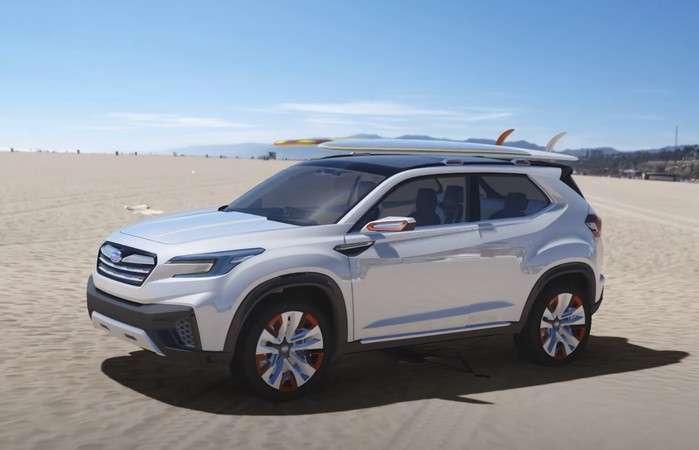 The new 2022 Subaru battery-electric model will be about the same size as the Subaru Forester compact SUV. Even though it's developed with Toyota, Subaru will keep the new BEV "distinctly Subaru."

Nakamura says its partnership with Toyota gives them access to new technology. "They have a lot of knowledge of electrified vehicles. So we thought working with Toyota would allow us to introduce an all-electric SUV and hybrid faster. We can absorb Toyota's knowledge." Stay tuned.

You Might Also Like: Subaru Boss Reveals How They Fix Past Quality Issues And Improve Its New Models Now

DeanMcManis wrote on December 10, 2020 - 4:49am Permalink
I'm not a fan of the wide black fender arches of this concept, but otherwise the angled, sharp, transformer styling looks good. I think that all of the Japanese automakers have been dragging their feet with BEVs. And the quote "Subaru is not expecting all-electric demand in the U.S. to increase anytime before the mid-2030s." is truly clueless. Meanwhile Tesla is opening up new Giga factories in the U.S. and around the world, and selling every car they build at a healthy profit. Subaru is often hanging off of Toyota's coat tails for new innovations. But Toyota has been very conservative, moving into hybrids and plug-in hybrids slowly, and not committing fully to BEVs. It's not a terrible move in my mind, because at least they are offering hybrid versions of most of their models, which will lead into buyers wanting EVs once they experience their advantages. Like Toyota, Subaru is playing it safe and going slow into EVs. But I hope that they realize that EVs are coming sooner and faster than most legacy automakers are planning for. And if they don't prepare to build competitive BEVs very soon, they will be passed over by visionary EV automakers who are not trapped with antiquated consumer sales models that will soon be obsolete.
Leif Hietala wrote on December 10, 2020 - 10:25am Permalink
I've liked Subaru for a long time but the statement that they don't expect EV demand to expand is just tone deaf. Did they think all those Tesla sales were make believe? The generally awful first-gen Nissan Leaf nevertheless sold pretty well for what it was, even in wide-open US markets. And as terrible as 2020 has been, it looks like the Chevy Bolt is still going to crack 20,000 examples sold for the year. The EV market is expanding NOW and Subaru's statement is utterly inexplicable.
Henry Pacheco wrote on December 10, 2020 - 3:14pm Permalink
It’s over for gasoline. Automakers hoping to unload old technology & parts. Start/Stop etc. dumb & unreliable. Expensive solutions. Move quickly to electric! Or die.
Kent wrote on December 23, 2020 - 6:44pm Permalink
Agreed. I’m a big Subaru guy but if they don’t have competitive AWD all electric models available when I’m ready to buy in the next 5 years, I’ll go elsewhere. I’ll also be an early buyer for autonomous driving. Get with the times, guys.
jg wrote on December 13, 2020 - 11:44pm Permalink
An underlying reason for many of the manufacturers’ reluctance to commit vast resources to full scale electric vehicle production may be the promise of solid state battery technology (which has started making recent news). While it seems like an easy substitution to switch once a new type of battery comes along, there are enormous costs in setting up the supply chain and product needs to meet the market expectations of performance and range. As far-superior and safer batteries become mainstream, I can imagine a point in the not to distant future when all the investment Tesla and other manufactures are making in battery production becomes practically obsolete overnight.

Tesla-Funded Research Reveals One of The Biggest Mysteries of EV Battery
Tesla Tesla Buyer Nets a Whopping $12,000 Discount After Asking for Reduction
END_OF_DOCUMENT_TOKEN_TO_BE_REPLACED