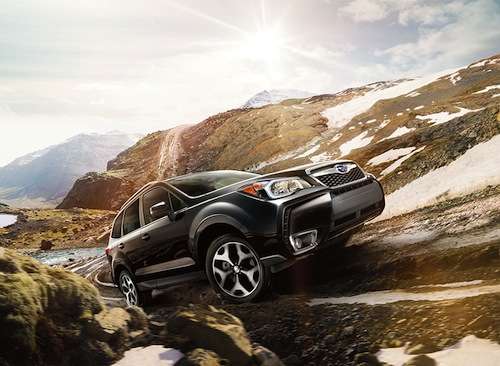 Subaru pits Canadian families against each other to win 2014 Forester

Subaru of Canada is pitting families against each other in a wild competition for the chance to win an all-new 2014 Subaru Forester. Do you have what it takes to win?
Advertisement

What could be more fun than loading up the kids, heading to Montreal and driving through a challenge and performance course in a new Forester. Subaru is pitting Canadian families against each other in a fun and wild competition and giving away a free 2014 Forester to the winner. Subaru has come up with a brilliant marketing move and is getting Canadians excited about the new crossover. As the Japanese automaker rolls out the new Forester in Canada, they chose an exciting competition to draw attention to the newly designed mid-size SUV.

What do families need to do to qualify?

Interested families can go online and register for the “Forester Family Rally.” Registration opened on April 8 and ends on June 9, 2013. The competition is open to all Canadian residents who are the legal age of majority in their province. They will then need to fill out a form and answer a few questions. Out of all the entries, it will be narrowed down to 50 semi-finalists who will then proceed to the next round. Those families will then be given a chance to submit either a video clip that is no longer than 90 seconds or they can submit an essay up to 300 words in length.

Do you have what it takes?

The video or essay must depict and/or explain why your family are the perfect candidates to compete in the Forester Family Rally. The video must include all members of the participating family planning to be in vehicle during the competition. If an essay is submitted, a photo of all participating family members must be included. A panel of judges will then select five finalists based on originality, creativity, content and the appropriateness to the theme, all of which carry 25 percent weight toward the overall score.

The five finalist families will be allowed to bring up to four guests on the trip. The rules specify that immediate family members are preferred, but they aren’t required. Because of the extreme nature of the competition, no children under the age of 8 may participate.

The rally will be challenging

The contest will take place at Mont Tremblant in Montreal, Canada between August 8 an 10. The five families will be flown to the location for a chance to compete for the grand prize: One 2014 Subaru Forester with an approximate retail value of $30,000 Canadian. Grand Prize includes destination/freight charges and all applicable fees and taxes. It sounds like a pretty sweet deal for the winning family.

Event challenges will include a series of challenges that will test the driving ability of the drivers. The rally challenge will include time trials and performance on a rally course. All five contestants will compete against each other and the results will be weighed by a panel of judges. The “Finalist Contest Judges” have been appointed by the Sponsor. Each finalist will be given an overall score by the contest judges based on a weighted points system that is specific to each challenge.

It’s not too late as interested families have until June 9 to fill out the form and see if they are one of the fifty finalists. The grand prize 2014 Subaru Forester is well worth the effort. And what better way to spend a family vacation in August then to be competing against four other families driving in a fun challenge contest. To enter the contest go to http://www.familyrally.ca/qualify.html