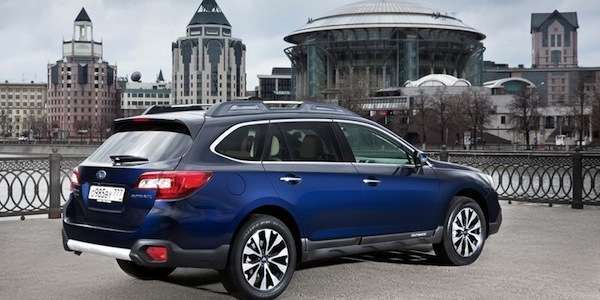 Because customers requests are so high, Subaru Motor in Russia will now offer another 2015 Outback model. What happened in Russia?
Advertisement

It pays to be the squeaky wheel as some Russians found out with Subaru Motor. Until a large number of Russian customers complained, they were only going to get one 2015 Subaru Outback model, the 2.5-liter four cylinder wagon. After Subaru Motor in Russia received so many requests for the 6-cylinder variant, they have decided to also offer the 2015 Subaru Outback 3.6R.

The SUV-alternative 2015 Outback is ready to make its dealer launch in Russia, one of the last global markets to get the new wagon. Subaru Russia was going to be getting one model, the 2.5iS model with the 2.5-liter boxer engine mated to a continuously variable transmission (CVT) and permanent all-wheel drive. The base model will cost 2.19 million rubles.

It was reported earlier that the Outback 3.6R would not be available for the markets of Russia and Belarus, but because the numerous requests from its customers, Subaru will begin selling Outback wagons with 6-cylinder engines on request.

In a surprising move, Subaru Motor announced the 3.6R Outback will also be offered along side the 2.5iS model. The basic package includes a rearview camera, seven airbags, cruise control, 18-inch alloy wheels, heated seats front and rear rows, two rows of electric and power liftgate.

All 2015 Outbacks are equipped with off-road X-Mode assistance, an intelligent drive SI-Drive system and the active traction control, similar to the WRX and WRX STI performance cars. This gives Outback better cornering behavior and increases the responsiveness of the steering control.

Russian Subaru dealers are taking orders now for the new wagons as demand is outstripping supply for the new 2015 Outback around the globe. In North America, Outback is having much success with record sales in April in both the U.S. and Canada. In Australia, Outback just passed the 90,000 sales mark and setting new...read more.

Subaru Motor, the official distributor of Subaru cars in Russia and Belarus, announced the official launch of the new 2015 Subaru Outback and Russian consumers will now get the 3.6R model because they spoke up.