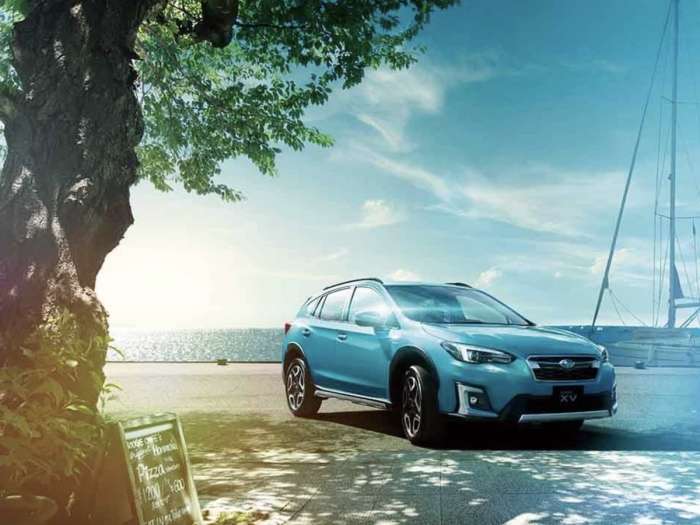 Subaru needs to catch up with other automakers in their all-electric technology. In January, Subaru Corporation was rated the worst global automaker positioned to handle the soon-coming EV revolution. According to the study in the UK by the CDP, Subaru is the worst performing carmaker on climate issues as the global auto manufacturing sector gears up for a period of incredible change.

Subaru is making some advances and they bring two new vehicles to the Tokyo Motor Festival this month October 6-8. They will exhibit their new 2019 Subaru Crosstrek e-Boxer Advance Hybrid prototype (XV outside North America), and the 2019 Forester e-Boxer Hybrid. Both vehicles will be sold in Japan, and likely in Australia and also Europe.

The 2019 Crosstrek e-Boxer Hybrid won't be sold in North American. U.S. customers will be getting its own first-ever 2019 Subaru Crosstrek plug-in hybrid (PHEV) coming later this year, and it will incorporate Toyota Prius Prime technology.

The system is mated to a full-time all-wheel-drive system and Subaru’s Lineartronic CVT automatic transmission. Subaru has not released fuel mileage estimates but says it will have increased efficiency, improved fuel mileage, and better performance over the standard model.

Why is Subaru slow to the EV game?

Torque News reported in January, Subaru’s strategy is to sit back, let the big automakers spend huge amounts of money on perfecting the all-electric technology, and then when consumer demand for the vehicles picks up, they will be there when the costs of batteries have dropped drastically.

Subaru also has another ace up their sleeve. Toyota Motor owns 16.5 percent of the Japanese automaker allowing Subaru to tap their vast resources to help them develop the new electric technology. That partnership and Subaru’s relatively small size enables the Japanese automaker to believe they can afford to be patient.

A new Subaru electric vehicle is coming and it should arrive in 2021 or 2022. Subaru has a new name “Evoltis” set aside for some new model in the future but has not confirmed what it will be. The new EV could be called “Evoltis” but will likely be built on an existing nameplate and not be an all-new vehicle. U.S. customers are getting Subaru’s first-ever 2019 Crosstrek plug-in hybrid (PHEV) later this year. Stay tuned.

Stefan wrote on October 5, 2018 - 2:47am Permalink
Good update, but I wonder if giving forester engine specs is confusing if the article is about the XV. If specs are same then perhaps mention this. At the moment I cannot tell what the specs are for the XV
Denis Flierl wrote on October 7, 2018 - 6:43am Permalink
Stefan, Subaru Corp has not released specs on the XV yet. Stay tuned. Thank for reading!
Stefan wrote on October 8, 2018 - 1:28am Permalink
Thanks for the clarification. :)
Daniel R. Watkins wrote on October 23, 2018 - 10:21am Permalink
Very interested in if the XC Crosstrek plugin hybrid will actually have an Atkinson cycle boxer engine, a first for Subaru too. Because, the previous mild hybrid Crosstrek had the regular OTTO cycle 2L engine, horrible. It better have Atkinson, i'd find it hard to believe Toyota would agree with the design unless it does. And gosh, if only 3.3KW charging vs 6.6KW+ that won't be good.