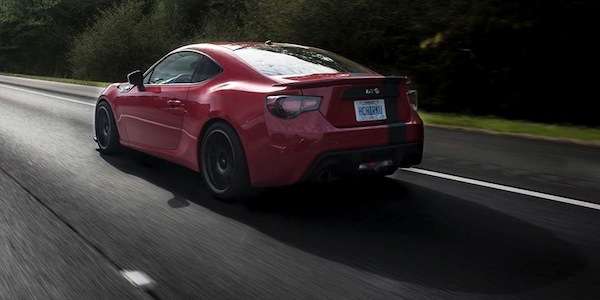 For some reason, Subaru BRZ drivers are seriously more cautious than Scion FR-S drivers. Why do FR-S owners get a lot more tickets?
Advertisement

It doesn’t surprise us that Subaru WRX/STI drivers get the most speeding tickets in the U.S., but what’s up with Scion FR-S drivers and why do they get so many more tickets than BRZ owners? Insurance.com analyzed online quote information submitted by 557,238 drivers January 2013 to July 2014 and found out which cars get the most speeding tickets. And sporty two-door FR-S coupe owners are tops on the list. Of course they don’t tell us why and and that’s the questions this study raises.

For anyone who has driven the 2015 Scion FR-S on the track, know that this rear-drive coupe is fun to drive. It’s even more fun to drive fast and that’s what FR-S owners know all too well. Insurance.com says, “Cars don’t get tickets, drivers do. But speeders tend to prefer many of the same cars.” The Scion FR-S just begs to be driven fast and more of its owners do and have the speeding tickets to prove it. But why don’t Subaru BRZ owners gets as many tickets?

Just like Subaru BRZ, both cars are powered by the same 200 horsepower Boxer engine and they have great driving dynamics. FR-S/BRZ is no high-performance power house, but its 200 horsepower Subaru boxer engine is plenty potent to get FR-S drivers near the top in speeding tickets. Driving enthusiasts are attracted to the FR-S/BRZ rear-drive two-door coupes because of their driving dynamics. For less than $26,000, the new 2015 FR-S offers more fun per dollar than anything else on the market.

That’s what Toyota and Subaru were hoping when they decided to collaborate and build a two-door rear-drive sports car. But Scion FR-S owners definitely drive their cars faster on the street and take more chances. Maybe the Subaru BRZ attracts an older more cautious driver and FR-S owners are younger and take more risks with their rear drive sports cars. The Scion brand was created to attract a younger buyer and it looks like they succeeded.

When Toyota introduced the Scion brand in 2002, their goal was to develop a brand that would attract young buyers into the Toyota family. They definitely achieved that goal and FR-S is the sportiest model in the lineup. When Akio Toyoda Toyota’s CEO took over, he infused his car company with a new spirit, and as a certified test driver for Germany's famed Nurburgring, Toyoda brought a racing passion to the company. The Scion FR-S/Toyota GT86 is a direct result of that passion.

Subaru WRX/STI ranks number one on the list with 33.6 percent of its drivers getting traffic tickets. Pontiac GTO (32.7%) is second, followed by the Scion FR-S (32.6), Toyota Supra (30.8) and surprisingly another Subaru, the Tribeca (29.07) rounding out the top five spots. The Volkswagen Rabbit, Mercury Topaz, Scion tC and Toyota FJ Cruiser finish out the top ten with the most tickets.

Scion FR-S owners are younger and take more risks than Subaru BRZ owners do on the road. It’s a direct result of why the Scion brand was developed in the first place. It attracts a much younger buyer looking for that sporty driving experience. It’s definitely working for Scion and it shows in how many more tickets their owners get.

Other 2015 Scion FR-S stories of interest.
Are you getting too many speeding tickets? Don’t ask Scion FR-S drivers.

Nick wrote on October 20, 2014 - 10:32pm Permalink
There is a ratio of 9:1 Toyota/Scion : Subaru correct? So shouldn't that mean Toyota's get 9x the tickets? It's like saying Camry drivers get more tickets than F430 drivers. There are millions of Camry's and a few hundred/thousand F430's therefore yes Camry drivers would get more tickets by volume but perhapse not by vehicle to ticket ratio? Just saying.
Josh wrote on October 21, 2014 - 12:10pm Permalink
That's a good point ^^^, but this isn't comparing Toyota to Subaru as a whole, it's looking at specific cars, mainly the FRS and BRZ. How else would that explain that WRX drivers get more tickets than the Scion FRS on average when the WRX is Subaru and the FRS is Scion/Toyota? Also the main reason why the FRS owners are a much younger crowd is because it is much cheaper to buy one, being less in price than Subaru, and also being much easier to get financing for based on how large of a company Toyota is. I experienced this issue myself when trying to buy my BRZ.
Mike Hunt wrote on October 27, 2014 - 2:35am Permalink
Pathetic article, I don't believe this true at all, myself a Subaru Outback driver, who has custom fitted some mad 22 inch chromies knows that Subaru BRZ drivers take far more risks because they are cooler. Nuff said.