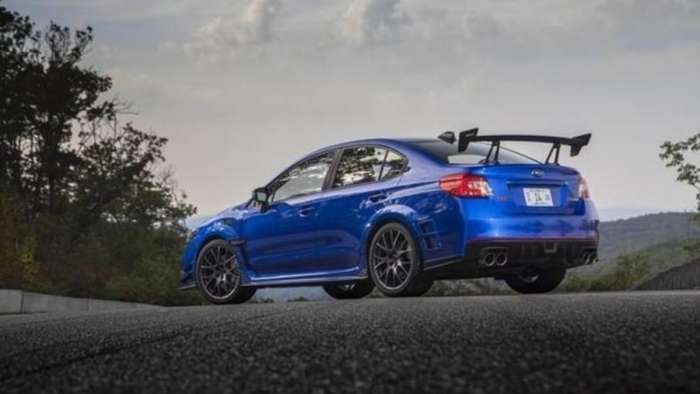 Subaru Announces A New Limited-Production Number For The STI S209

Subaru has announced a new number of 2019 STI S209 performance cars they will bring to the U.S. for fans. They are bringing an extra 9 S209s to U.S. shores.
Advertisement

On the heels of the Tokyo Motor Show 2019 announcement that the Japanese automaker is not revealing the next-generation 2021 Subaru WRX STI at the show, Subaru of America needed to announce something new for the performance car so here it is. Subaru says they will build 209 Subaru STI S209 performance sedans for U.S. fans. They originally announced there would only be 200 brought exclusively to the US.

So that’s the big news of the day for the new Subaru STI S209. An extra nine of the exclusive models will be built. This will give nine more dealers the chance to mark up the price on the limited-edition STI S209. Subaru of America did not announce pricing yet but expect the hottest STI Subaru Tecnica International (STI) has ever built to fetch a hefty price. The 2019 Subaru WRX STI starts at $36,595 plus destination. The next level up is the WRX STI Series.Gray, which has the same MSRP as the base STI. The STI Limited stands one level above the Series.Gray and starts at $41,395. Since Subaru has not released pricing on the all-new limited-edition S209 which Subaru calls “the most powerful, best-handling, and most exciting” STI vehicle to date, it will likely command a considerable cost for all its performance upgrades from STI.

Pricing will be considerably more than the Limited model and will likely be well over $50,000. And given only 209 will be built for the U.S., expect the possibility of some healthy dealer markups. And you won’t be able to walk into your local Subaru dealer and buy one of these S209 STIs. In Japan, the S-line limited editions are limited in more than just production numbers. Purchasing an "S" model is different because it’s not a Subaru product, because it’s produced for Subaru by Subaru Tecnica International. Previous Subaru "S" models sold in Japan were sold via a lottery to determine who is lucky enough to get one. Just because you have the cash, doesn’t mean you will get one. You will likely have to get lucky to even be selected to get one of the 209 examples being shipped to U.S. shores. All 209 of the 2019 Subaru STI S209 will begin arriving late this year and will be offered with WR Blue Pearl exterior color with gray wheels or in Crystal White Pearl/gold wheels. Pricing will be announced closer to the dealer launch, but it won’t be cheap or easy to get one. Stay tuned.