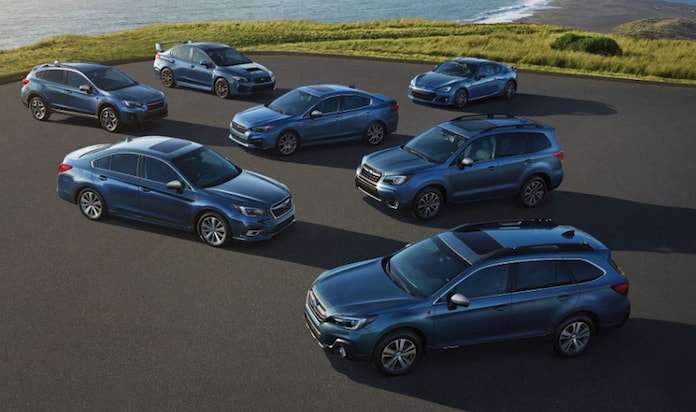 Subaru reveals the 50th Anniversary Editions on their The Cars pages as they celebrate 50 years in the U.S.
Advertisement

Subaru said the 50th anniversary limited edition models will feature the new, Heritage Blue color (not officially announced) and will also come with special badging. The commemorative "Subaru 50th Anniversary" badge with a silver ring, gold star and the Heritage Blue color will be placed on the front fender of each model, and they’ll also get special silver wheel finishes. Inside, each model will feature black leather upholstery, silver stitching, silver seat belts, and special embroidered logos. Limited numbers of each model are arriving now at U.S. Subaru dealers.

Here’s a brief rundown of 50 years of Subaru in the U.S. market.

1967: Built under the Fuji name, the Rabbit S-1 scooter started production in June, 1946 even predating Vespa.

1969-1970: Subaru introduces the FF1, the first front wheel drive car from Japan boasting a unique horizontally-opposed, water-cooled. 4-cylinder engine. The FF1 was marketed to rural America because its better handling FWD showed advantages on righter rural roads. The cat was available as a 4-door sedan, wagon, and a 2-door coupe with a 1088-cc engine. It sold for $1,699.

1973: The FF1 is replaced by the larger, more powerful Leone series, which is marketed as either a DL or GL model, regardless of body style to establish the Subaru name.

1980: A Subaru team appears for the first time in the World Rally Championship (WRC).

1987: Subaru introduces the the U.S. to the Justy, the first modern mini-car from a Japanese importer and the only car in the U.S. sold with an Electric Continuously Variable Transmission (ECVT). The company also introduces full-time-4WD on GL and DL models.

1989: The Legacy is introduced, the first Subaru vehicle built in the U.S. and a clear move to position the automaker as more upscale.

1993: Subaru introduces the Impreza, available as an economy compact sedan and sport wagon.

1998: Subaru introduces the Forester, a sport utility vehicle (SUV), smaller than the Outback but bigger than Impreza.

2000: Subaru unveils the ST-X concept car in January at the LA Auto Show. Reminiscent of the BRAT, this pickup featured an extendable 55-in bed and four full doors. Thew ST-X is built on the Legacy platform with a supercharged 230 horsepower boxer engine and a 5-speed manual gearbox.

2001: Subaru unveils the all-new Impreza WRX Sedan and Sport Wagon with a 2.0-liter turbocharged boxer engine at the North American International Auto Show. The model started the performance car craze in the U.S.

2005: The B9 Tribeca, is the first seven-passenger vehicle from Subaru. It was introduced at the North American International Auto Show in Detroit. Tribeca was discontinued in 2014.

LG's New EV Battery Plant Is a Welcome News for Tesla
Tesla Giga Berlin's New Hurdle: It's Not Only the Gov't, but Now Tesla Itself
END_OF_DOCUMENT_TOKEN_TO_BE_REPLACED