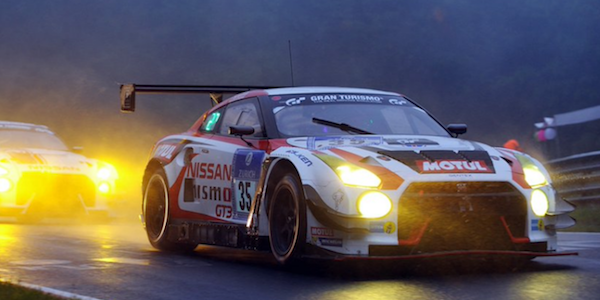 Nissan: 5 Reasons Why Nurburgring 24-Hr is the Hardest Race In the World

The Nurburgring 24-hour race is tough. Nissan can tell you. What happened to their GT-R?
Advertisement

How tough is the Nurburgring 24-hour race? Nissan’s GT-R missed a top ten finish. Their goal was to be in the top 10 finishers, but they just missed and came in 11th place this weekend. It’s a grueling race and the weather didn’t help. What happened this weekend?

Torrential rains and hail turned the Nordschleife into a dangerously slippery track between a water slide and an ice rink. Nissan's GT-R driver line-up of Michael Krumm, Alex Buncombe, Kazuki Hoshino and Lucas Ordonez battled severe weather, which caused the race to be red flagged for four hours. Why is the Nurburgring 24-Hr the toughest race on the planet? Check out the Nissan GT-R team’s explanation.

The pit is crowded

Bob Neville, Team Principal for the Nissan Academy RJN says the Nurburgring 24-hour race is the toughest race in the world. Why? Neville says, there are cars everywhere and it’s hard to navigate on the track, in the pits and in the garage. He says, “Logistically it’s very difficult. The track is solid, the pit lane is solid and there’s six cars in every garage.”

Kazuki Hoshino, NISMO team driver says the weather can change from one part of the track to another within minutes. He says, “Some parts of the track will be dry and in another second it’s suddenly raining.” Drivers experienced it this weekend when the weather turned severe after just 4 laps into the race.

Michael Krumm, NISMO team driver says, the track is crowded with over 150 cars vying for position at the start of the race. He says, “With this many cars (over 150), it’s really the craziest race out there.”

It’s a mental and physical challenge

No room for error

Lucas Ordonez, NISMO team driver and GT Academy winner 2008 says it’s a long track with little room for mistakes because there’s nowhere to pull off. He says, “It’s the most challenging for sure. At 25 km long, it’s the longest track in the world. We have no run-offs and there’s grease everywhere.”

The Nissan GT-R Nurburgring team knows how difficult it is to get into the top ten finishers. They just missed their goal and finished 11th. The Nurburgring 24-hour is the toughest race on the planet.

Watch: 5 Reasons Why the Nurburgring 24 is the Hardest Race in the World! video.