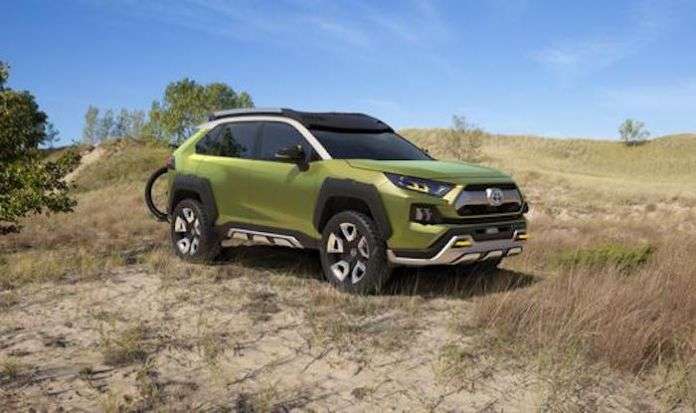 Subaru has been officially been put on notice, the 2018 Crosstrek is in Toyota’s crosshairs.
Advertisement

Subaru has been officially been put on notice, the all-wheel-drive Crosstrek will have direct competition from Toyota in the near future. The Toyota Adventure Concept FT-AC makes its debut at the Los Angeles Auto Show and a similar model has been confirmed. According to a report by Motor Authority, a Toyota official has confirmed they will launch something similar to its latest Toyota Adventure Concept, the FT-AC, in the next few years.

Listen to Toyota Motor North America General Manager Jack Hollis and see if they haven’t taken a page directly from the Subaru playbook. Hollis says, “FT-AC is perfect for those outdoor enthusiasts who want to dial up the adventure on their weekend getaways. No matter the roads, the activities, or the people, FT-AC sparks authentic fun and conversation.”

Toyota also says, “FT-AC’s contrasting colors combine Prospect Green with Fortress Gray accents to highlight its go-anywhere brashness.” Another scripted page right out the Subaru Crosstrek playbook. Like the Crosstrek (compared to Forester), Toyota’s new adventure vehicle will be smaller than the RAV4, and powered by a smaller inline-4, and Hollis also confirmed that while it'll come standard with front-wheel-drive, Toyota will offer all-wheel drive which is what sets the Crosstrek apart from other small crossovers like the front-drive Toyota C-HR.

Subaru’s niche market of all-wheel-drive vehicles, that will get adventure seekers away from civilization, is being challenged by this new Toyota. Subaru’s all-wheel-drive SUVs, wagons and CUVs have a reputation as “go-anywhere” vehicles, and Crosstrek now gets X-Mode as standard like its stablemates Forester and Outback. Subaru’s X-Mode can be used for extreme off road situations, and it will be interesting to see if the new Toyota Adventure vehicle gets something similar.

Hollis said the new subcompact crossover should hit the market in the next two to three years, and given the market position, it could start at less than $20,000. That will put it right in line with the 2018 Subaru Crosstrek with a starting price of $21,795. Subaru Corp has been officially been put on notice, the 2018 Crosstrek is in Toyota’s crosshairs.

Ed B wrote on December 8, 2017 - 8:29am Permalink
Interesting concept. I don't think Subaru will have much to worry about. AWD on Toyota's has been traditionally "AWD Light" and not very effective in snow here in the northeast. The Subaru system is superior and coupled with X Mode, it's tough to compete with the Crosstrek. One thing we do know, Toyota will win on style points - but that may not be enough in this particular segment.
Dave wrote on December 9, 2017 - 12:29am Permalink
If they have a decent 2 liter with a turbo and AWD with a stick shift they would have something. Toyota can do a great AWD if they want. I had a Celica All-Trac that was a blast in the snow. Keep in mind that car was a 1988. I'm sure they have learned something in the last 30 years.