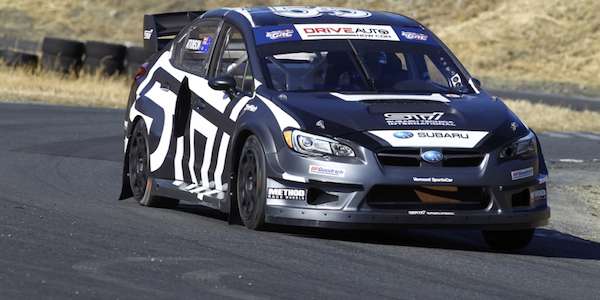 Subaru is serious about competing in this season’s Red Bull Global Rallycross season. Subaru has two new drivers and one of the new cars is being tested now in Japan ahead of the upcoming GRC race season. Subaru Tecnica International (STI), Subaru’s motorsports partner, has been testing Chris Atkinson’s new Subaru WRX STI Global Rallycross car in Japan.

Last season Subaru was only involved in a select few races, and they were developing the WRX STI cars on the fly. SRT USA needs to compete with Scott Speed and Tanner Foust in their Volkswagen Beetles that have dominated the sport if they want to see more podiums. This season, Subaru vows to bring a “full-fledged” effort with new drivers Chris Atkinson and newly-signed Patrik Sandell right from the start.

Races are won or lost at the start

STI enlisted Toshihiro Arai, their Japan Champion Rally driver, to drive Atkinson’s STI at the Honjo Circuit in Saitama Prefecture recently. The goal for STI is to improve the engine output, durability and reliability, and also the launching abilities of the WRX STI at the start of the race. Races can be won or lost by who gets off the line the quickest. They also want to improve the STI’s cornering speed and rigidity of the chassis to take the high-speed turns and pounding from the jumps.

STI’s senior project manager, Nomura, says they are working on improving the WRX STI’s launch characteristics. He says, "In order to decide the ideal start dash, it is necessary to obtain optimum torque characteristics. It is basically controlled by engine speed and boost pressure, but if the torque is too large, the wheels spin to much. In a sense, there are several things to consider, since it is an analog launch control, depending on the road surface condition of the actual course, weather, temperature, can effect the tire's grip. It is necessary to prepare the control software for the team. The team chooses the software according to the situation of the day.”

STI is developing the engines for the WRX STI GRC machines. The engine being tested is 580 Nm (572hp), ​​but says new engines for the upcoming season will have more power. STI is also working on reducing the weight of the 2.0-liter boxer powerplant. Nomura reveals, “We are planning to further concentrate the mass even in the chassis.”

Arai who just got done testing in Japan says the new Subaru WRX STI will be faster. He says, "This machine is still faster, please expect it.” Can Subaru compete with Scott Speed and Tanner Foust in their VW Beetles? Round one is in Memphis, TN, April 29. Stay tuned.