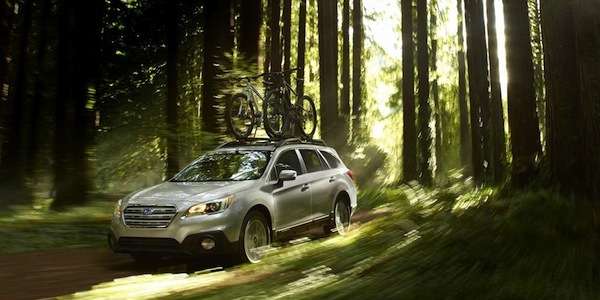 The new 2015 Subaru Outback gets three new global awards. What is turning the heads of Auto Trader, Cars.com and AJAC?
Advertisement

The newly-redesigned 2015 Subaru Outback is impressing the automotive community and picks up three new awards. Why is the new wagon getting so much attention? The Subaru Outback has always been looked at positively for making the most from its practical body style, providing ample cargo space, and its all-wheel-drive system that will take its driver and passengers anywhere they want to go. But Outback has received some new upgrades that is getting it lots of attention.

The new Outback gets three new awards and it is standing out from all the other wagons, SUVs and family cars on the market. The 2015 Subaru Outback made the list of Cars.com’s “Best of 2015” award and was the Best New Wagon of 2015. The new Outback was also named AJAC's Best New SUV Under $35K in Canada and the new SUV makes Auto Trader’s “10 Must Shop Family cars” list for 2015.

No longer just a weekend warrior

The new Outback is being looked at differently now and moves from being standard safe transportation and a good weekend warrior to a first-class wagon. Auto Trader, Cars.com and the Automotive Journalists Association of Canada (AJAC) are praising the new Outback for its first-class multimedia system and a new more stylish competitive interior. Cars.com says, “No longer do shoppers have to make a trade-off on top tech versus practicality with the Outback.”

The new Outback wagon was completely redesigned for 2015 and comes with improvements to the engine and transmission that gives it improved fuel mileage even with its standard all-wheel-drive system. But what is getting the most attention is how Subaru engineers upgraded the new cabin that is quieter than the previous generation wagon. This is due to a new acoustic windshield, liquid-filled engine mounts, thicker panels in key locations (floor, toeboard, rear wheel apron, inner fenders) and expanded use of foam insulation and floor damping material.

CHECK OUT: Is the 2015 Subaru Outback getting too soft for recreation enthusiasts?

These major improvements that Subaru accomplished with the 2015 Outback is getting the new wagon lots of attention in the auto industry and with consumers. In the U.S., Subaru sold more Outbacks than any other vehicle in their lineup in November. The 2015 Subaru Outback is reaching never before seen new heights and is one of the top models for 2015.

LG's New EV Battery Plant Is a Welcome News for Tesla
Tesla Giga Berlin's New Hurdle: It's Not Only the Gov't, but Now Tesla Itself
END_OF_DOCUMENT_TOKEN_TO_BE_REPLACED