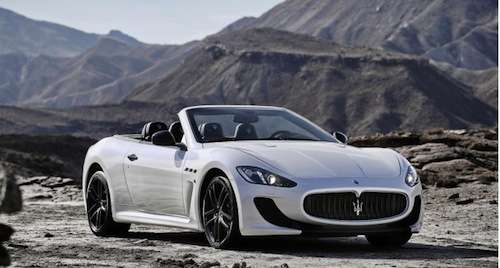 The new Maserati GranCabrio convertible MC is more aerodynamic and set to fly into Paris as it makes its International debut.
Advertisement

Maserati has revealed the Maserati GranCabrio convertible MC just ahead of the 2012 Paris Auto Show this week and the sports car is more aerodynamic than before. While Maserati hasn’t released details on the new open top sports car, it is designed to compete in the world’s finest open top range. The new sports car is the convertible version of the Gran Turismo MC coupe that went on sale in 2011.

The new Maserati GranCabrio MC gets its sporty characteristics and high performance from its race-inspired experience that comes from the race version of the Gran Turismo MC that competes in the Maserati Trofeo MC World Series. The race series recently made its North American debut at Sonoma Raceway in California and actor and race driver Patrick Dempsey was there to compete.

The new convertible sports car has new styling and is more aerodynamic. Maserati says the new GranCabrio MC “has a highly sporty and aggressive look, while maintaining the strengths and characteristics of a true grand tourer, ideal for long journeys.” The sports car will certainly be able to cut through the wind easier at high speeds. The car will feature new wheels, an aggressive diffuser, and a larger spoiler on the rear deck.

The new GranCabrio MC is 48 millimeters longer than the GranCabrio and GranCabrio Sport and the open top car gets a new front end that was inspired by the MC Stradale. The new styling is designed to maximize aerodynamic lift and reduce wind resistance. The improvements in additional length and changes at the rear of the car add to its aerodynamic characteristics.

The rear of the sports car gets a large spoiler, for greater negative lift at super high speeds on the track. The third brake light is incorporated inside the spoiler that is built into the trunk. The spoiler comes in the same color as the body and can be ordered with a new carbon finish.

Maserati has definitely upped the exterior performance characteristics of the GranCabrio MC and hasn’t released powertrain details of the open top car. We would expect to see the same 4.7-liter V-8 engine mated to a ZF six-speed automatic transmission found in the Gran Turismo MC coupe. That engine produces a healthy 444 horsepower and 376 pound-feet of torque and sprints from 0-60 in less than 5 seconds. The coupe has a top speed of 185 mph.

Maserati has had considerable success with the GranTurismo MC Stradale in which the company says was “warmly received by customers.” That inspired the Italian automaker to build the all-new GranCabrio MC. The new convertible should be as successful with its new sporty aggressive styling.