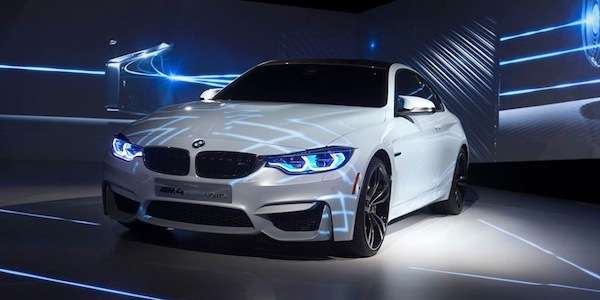 BMW brings the new M4 Concept to CES to show off their latest lighting technology.
Advertisement

Lighting doesn’t add performance or power to the BMW M4, but the it sure can add to the image of a car and to a brand. It also goes beyond just aesthetics and adds function and safety to the performance car. BMW has already brought out their new Laserlight technology in the i8, and now they are presenting further laser functions for their performance vehicles of the future at the Consumer Electronics Show (CES) in Las Vegas. BMW chose to bring a new Cool White metallic M4 to display their new lighting technology because it’s the brand’s iconic performance car.

At CES in Las Vegas, the BMW M4 shows how the Bavarian automaker will use Laserlight technology and extensively integrate it with assistance systems and vehicle sensors. This new lighting system can be used to implement new intelligent lighting functions for enhanced safety and comfort with the navigation system to illuminate corners well in advance. It also uses a laser-based Dynamic Light Spot that can provide early warning of people or animals at night from a distance of up to 100 meters. Even though safety is being enhanced, the brand’s image may be more important.

It’s also about the image

It’s no accident that BMW chose the Cool White metallic BMW M4 Concept to show off the new lighting system. Lighting is an important design element in all automobiles and it will make BMW’s performance cars stand out from the crowd with its laser technology. BMW will advance their brand image with this new lighting technology. The M4 can be identified by the unmistakable fine blue strips inside the lights. Drivers will be able to identify BMW’s cars from the front or rear with the rear light clusters with new OLEDs (organic light-emitting diodes), which produce light from wafer-thin semiconducting layers of organic material. Now for the first time, both tail lights, and rear direction indicators, feature OLED technology. The illuminated surfaces are positioned to produce an unmistakable three-dimensional effect.

BMW M owners will be able to let those who are following, know that the performance car is in Sport mode. This will flaunt the M’s intentions to anyone who is behind the performance car. This is done by activating the OLED segments individually. Normally, the L-shape is wide and uniformly illuminated, in Sport mode a different-shaped light pattern can be used by activating only some of the OLED segments. The rear light then appears as a narrow, focused and sharply defined “strip” of light.

The new BMW i8 was the world’s first series-produced vehicle to be available as an option with innovative laser headlights and the Bavarian automaker is enhancing its brand’s image with the new technology. We may not see the new headlights here in the U.S. because BMW says they "currently do not comply with U.S. regulations." BMW M GmbH says they will be launching a new M performance car soon featuring OLED technology and it will likely be a new M3/M4. BMW may have some lobbying to do to enhance their image in the U.S. Stay tuned.