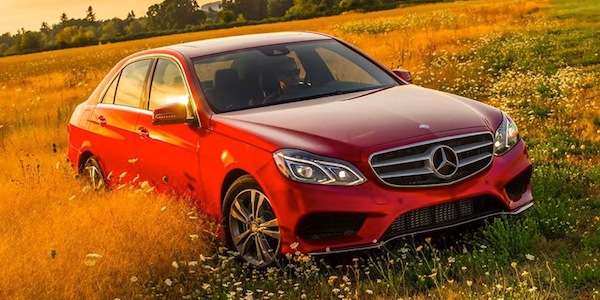 The most fuel-stingy car in America isn’t a Prius, it’s a Mercedes?

The 2014 Mercedes-Benz E250 BlueTEC is the most fuel-efficient car in America? According to Road & Track, it beats the Toyota Prius.
Advertisement

“America’s most fuel-efficient new car isn’t a Prius,” according to Road & Track Magazine. It’s the luxurious 2014 Mercedes-Benz E250 BlueTEC. The $51,400 Mercedes E250 BlueTEC is a fuel-stingy luxury sedan that is powered by a 2.1-liter twin turbo in-line four cylinder diesel engine that could change the perception of diesels in the U.S. Europeans have known for decades just how fuel-efficient they are. But this test by Road and Track is very interesting.

R&T took both a new 2014 Mercedes-Benz E250 BlueTEC and 2014 Toyota Prius for a test run to see how the Mercedes would stack up against the best-selling hybrid model in America from Toyota. What they found out in a real-world test, is that Mercedes-Benz's new E250 Bluetec Sedan earns Toyota Prius-level numbers on the EPA's highway fuel-economy test.

EPA estimates for the Mercedes-Benz E250 BlueTEC are 28/45 city/highway. The 2014 Toyota Prius gets an EPA estimated 51/48 city/highway. But what happens in a real-world test of both models? R&T set up a test to drive a pre-determined course where both cars were driven “reasonably” and they stayed together.

Road & Track drove both cars 390 miles and says, “We mapped a route of backcountry, highway, and in-town roads that both cars could complete on a tank of fuel. There were only two rules for our test drivers: stay together and drive like reasonable human beings.”

After navigating both cars on the 390 mile course, the Mercedes's trip computer showed 534 miles of range remaining, the Prius's indicated range dropped to zero. They went on to say, “We drove another 20 miles before we stopped to refuel. Our hypothesis was correct: The Mercedes used half a pint less fuel in mixed-use, real-world, conservative driving. That's well within the "noise" of measurement error, so in fairness, this is a tie.”

But they declared the Mercedes E250 BlueTEC the winner because of its luxurious ride and driving dynamics. They said the Prius felt like a “mooing four-banger and was a screaming stress case” while the Mercedes easily climbed mountain passes in top gear with the engine almost completely silent. And the Mercedes is 2.7 seconds quicker to 60 mph.

Road and Track found the fuel mileage on the Prius and E250 BlueTEC was “effectively tied, the driving experience was anything but.” If you haven’t driven a new diesel from a number of automakers recently, you’ll be surprised at the power and efficiency of the diesel technology. The new 2014 Mercedes-Benz E250 BlueTEC is both luxurious and fuel-efficient. The diesel engine is alive and well and Americans are finding out what Europeans have known for decades.

Other Mercedes-Benz and diesel stories of interest.

jstack6 wrote on February 28, 2014 - 1:05pm Permalink
And what was the pollution levels for all reading from CO2 to SO ? also how much brake wear and dust? A hybrid in atkins mode is much better, like the Prius, plugin prius is even better.
John Goreham wrote on February 28, 2014 - 6:46pm Permalink
179 Grams per mile CO2 for the Prius, 299 Grams per mile for the Mercedes. So the Mercedes is about 55% more polluting at the same MPG.
DICK MARTEL wrote on February 28, 2014 - 5:21pm Permalink
You forgot to factor in the fact that diesel is 11% more fuel dense than gasoline. When factoring that into the equation it appears that the Prius is about 11% more fuel efficient.
John Goreham wrote on February 28, 2014 - 7:02pm Permalink
In the US it takes about 40% more crude oil to create a gallon of diesel versus a gallon of gasoline. At my local gas station diesel costs $4.29 per gallon and gasoline is $3.50. The Mercedes that R&T tested cost $63,000. It is a couple seconds faster to 60 mph than the Prius. Surprised?
John Goreham wrote on February 28, 2014 - 7:06pm Permalink
The Honda Accord Hybrid beats the Mercedes E250 Bluetec in combined MPG (47 MPG for the Accord, 34 for the Mercedes), has the same highway mileage at 45 MPG (according to fueleconomy.gov) and costs about $35K. It is the same size as the Mercedes. According to Motortrend, it can go from 0-60 in 7.1 seconds. How quick is the Mercedes E250 diesel? Autoblog says it took over 8 seconds in their testing.
GregF wrote on March 1, 2014 - 7:30am Permalink
I have driven E250 and Accord Hybrid and would take the E250 over the the Accord any day. Accord was such a boring drive and sounded terrible. E250 smooth, energetic and a feel of one solid car. Also, my Dad owns a Prius and constantly gets low to mid 50's mpg driving it like a normal car.
John G wrote on March 1, 2014 - 4:49pm Permalink
The point of the story was not which is the better car. The Merc is. The point is that the Merc is not Americas most fuel efficient car. The Accord Hybrid is more fuel efficient. Also much more fuel economical. Also just as quick. Also roughly half the cost which puts it within reach of vastly more buyers. The point of fuel efficiency is to save money and oil, and to some, the environment. Diesels don't do these things.
GregF wrote on March 2, 2014 - 8:23am Permalink
I would never buy the Accord Hybrid, as I mentioned before it sounds terrible and don't believe it would get better mpg than the E250 on the freeway. Hybrids usually always underperform EPA projections (Prius is the exception) and diesels usually always over perform. I would take the Prius over the Accord Hybrid any day of the week, if you really want to maximize fuel efficiency. The Accord Hybrid offers a baby trunk, whereas E250 and Prius have lots of room for storage.
George B wrote on March 3, 2014 - 3:45am Permalink
Pointless comparing the current generation Prius (2009 Technology) with a 2014 Merc - wait till the next generation Prius comes along. The other aspect is the price, unless you compare similar price points you will be comparing two different categories of products.