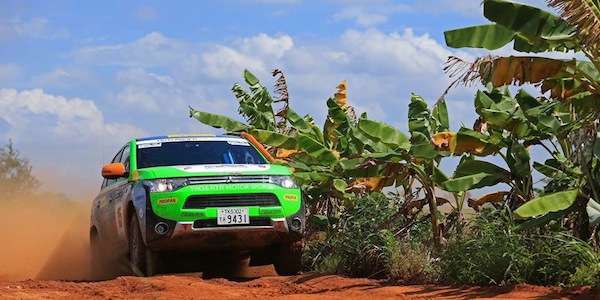 The 2015 Mitsubishi Outlander PHEV is entering another grueling global rally race, this time in the outback of Australia. This will likely be the plug-in hybrids toughest challenge yet. This Australian rally entry marks the third international off-road rally outing for an Outlander PHEV since its launch in late 2012. The Outlander PHEV's all-terrain performance and durability has been tested in the Thailand and Cambodia Asia Cross Country Rally, which the plug-in hybrid electric vehicle successfully completed in 2013 and 2014.

The 2014 Australasian Safari takes place over nine days in the outback in western Australia and is considered one of the most demanding off-road endurance rallies in Australia. The Mitsubishi Outlander PHEV will be the first plug-in hybrid four-wheel drive officially entered in an Australian motorsport event. The Outlander PHEV plug-in hybrid will compete in class A1 for production vehicles, in a category specially created for hybrid or dual powered vehicles.

Outlander PHEV will be thoroughly tested

The Australasian Safari is as challenging as it gets and the race demands stamina and endurance from drivers and vehicles alike. TMR Australia Outlander PHEV Safari Team Principal Alan Heaphy said, "From our long-term experience working with Mitsubishi products, the quality of engineering and technology is a good match for motorsport, and we're looking forward to proving the Outlander PHEV's durability and technology in genuine off-road conditions."

Mitsubishi is using the data from these grueling off-road rally races to use in their new electric production vehicles. The Outlander PHEV will compete in the Australasian Safari production class A1 and the SUV will be built to meet FIA specification with only minor modifications made for durability and safety. It will be outfitted with extra underbody and frontal protection, reinforced suspension arms and strut towers along with competition brake pads, rally tires and springs with adjustable dampers for added strength and durability.

Outlander PHEV the first of its kind

Mitsubishi's 2015 Outlander PHEV plug-in hybrid electric vehicle is set to tackle new challenges when it takes on one of the toughest off-road events in the outback of Australia next month which takes place from September 19-27. The 2014 Australasian Safari concludes in Kalbarri, 600 kilometers north of Perth on Saturday 27 September. Stay tuned to Torque News for the latest race results.