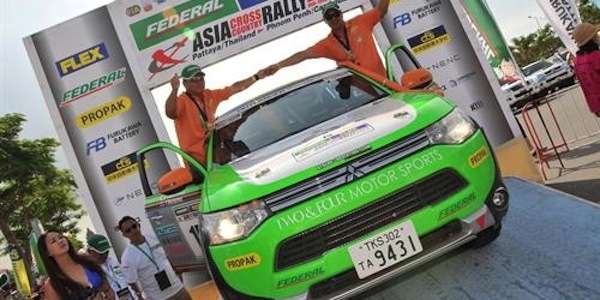 Could new Mitsubishi Outlander PHEV suddenly be a global game-changer?

The 2015 Mitsubishi Outlander PHEV wins its class in the Asia Cross Country Rally 2014. What does this tell us about this EV?
Advertisement

Mitsubishi Motors Corporation (MMC) is making a big statement with their involvement in motorsports. The Mitsubishi Outlander PHEV and MiEV Evolution both have impressive wins this year in their respective motorsports divisions. Mitsubishi Outlander PHEV just won its class in the Asia Cross Country Rally 2014 and the all-electric Mitsubishi MiEV Evolution III dominated with a first and second place win in the Electric Modified Division at Pikes Peak. What does this tell us about the future of MMC?

Automakers like Mitsubishi, use motorsports to develop their latest drivetrain technology that gets passed on to their production vehicles. There’s no better place than the grueling race environment to test how well their latest technologies hold up in an extreme environment. This is what MMC is doing with the Outlander PHEV and MiEV Evolution. They are testing their future EV production technology today.

Mitsubishi has two impressive wins in their international trophy case that show us what the future of performance cars will look like. Those of us in the U.S. should’t judge MMC on its North American market share. MMC is doing quite well across the pond. And Mitsubishi’s Outlander PHEV is doing very well in the overall EV sales in Europe.

Data from the European Environment Agency shows that nearly 50,000 plug-in vehicles were sold, representing around 0.4% of all car sales in the EU.The study shows that the top three selling EV models in 2013 were all new entrants to the market. Mitsubishi Outlander PHEV, Renault Zoe and Volvo’s V60 Plug-in topped all others in EV sales.

Data from the European Environment Agency also shows that sales of electric vehicles have doubled annually in Europe since they were first marketed in 2010. Automakers like MMC are needing to change and be innovative with these new technologies and for Mitsubishi, it begins in motorsports like the Pikes Peak Hill Climb and Asia Cross Country Rally 2014.

Outlander Sport is number one for MMC in U.S.

Look for MMC to keep the pedal down in their motorsport involvement as they use this valuable knowledge for future EV development like we see in the 2015 Mitsubishi Outlander PHEV that’s already in production and having an impact in the EU. It looks like it’s going to be a global game-changer for Mitsubishi.