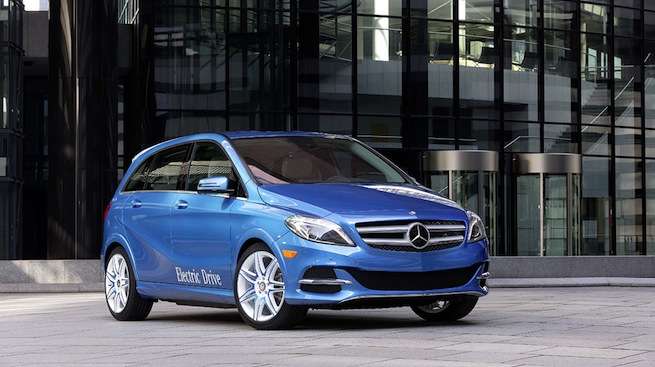 Mercedes-Benz may be developing a BMW i3 killer

Mercedes-Benz is about to launch the new 2014 B-Class Electric Drive and a forerunner to challenge the BMW i3.
Advertisement

Look for Mercedes-Benz to develop a challenger to the new BMW i3, and it could be in the works as Mercedes-Benz tries to overtake rival BMW. Mercedes-Benz has a goal to overtake BMW before the end of the decade, and it may include a vehicle to challenge BMW’s i3. Daimler owns a 4.3 percent stake in Tesla Motors, and they are looking to do additional projects with the Palo Alto, California-based automaker.

Mercedes-Benz will use a Tesla-designed all-electric drivetrain in the new B-Class Electric Drive set to launch early next year. According to a Bloomberg article, Daimler AG, maker of Mercedes-Benz automobiles, has plans for additional projects with Tesla to launch more electric vehicles in the future. Part of the reason is to move up and overtake their rival BMW. It looks like they will target the BMW i3.

Mercedes has a long-term strategy to gain market share in the luxury car market and will launch 13 new models in the next eight years. We see the beginning of that strategy with the recent launch of the new CLA four-door coupe and GLA-Class SUV launching next year. The B-Class Electric Drive is also part of their electric vehicle niche market strategy. The German automaker currently sells an electric version of the Smart city car and has rolled out a battery-powered 2014 SLS AMG gull-wing supercar that set a record at Nurburgring.

And it looks like there is more electricity in Daimler’s future and additional projects with Tesla. The Bloomberg article reported that at a recent press conference in New York, Mercedes Chief Financial Officer Bodo Uebber said to shareholders, “We should look at more cooperation so we like the stake.” He went on to say, “Tesla is an important piece of Daimler’s technology strategy as the German automaker looks at more applications for electric-powered cars.”

What else might Mercedes-Benz be planning beside a BMW i3 killer? Daimler is eyeing the electric luxury car segment and sees that Tesla’s Model S sedan is selling extremely well in eight of the 25 wealthiest U.S. ZIP codes, according to Edmunds.com. The luxury sedan is priced from about $70,000 to more than $100,000, and is perfect for the German brands luxury market niche. Look for Mercedes along with the Tesla technology to develop a luxury electric sedan in this price range.

We already see the Mercedes strategy working as they launch new vehicles to gain new customers who have never purchased a Mercedes-Benz vehicle before. Look for the new 2014 Mercedes-Benz B-Class Electric Drive to be a forerunner of more electric vehicles from the German automaker in the future. Also watch for a new Mercedes-Benz challenger to the new BMW i3. Stay tuned to Torque News for the latest EV news from Mercedes.