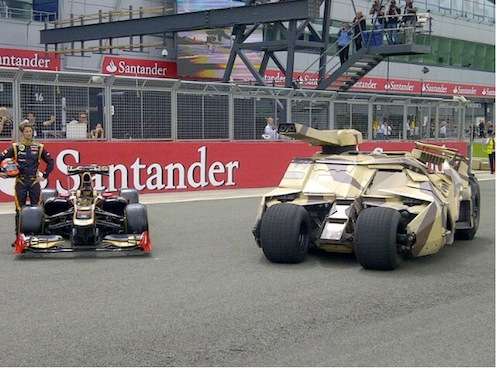 Lotus F1 teams up with The Dark Knight Rises

This weekend at the British Grand Prix, the Lotus F1 Team will partner with The Dark Knight Rises to help promote the new film.
Advertisement

The Lotus Formula 1 Team has announced they will be partnering with The Dark Knight Rises at this weekends Grand Prix of Great Britain. To celebrate the partnership, the E20 race car, the garage, and racing suits worn by the drivers will all be adorned in the movies logo of the film throughout the entire weekend.

The iconic Tumbler Batmobile will also be hand at the race and will be presented on the circuit surrounded by Lotus F1 Team drivers, Kimi Raikkonen and Romain Grosjean before the race. The presentation will take place today at noon on the straightaway near the start/finish line at Silverstone F1 for the official media to have a short photo session with the drivers.

The famous Bat-Pod dragster motorcycle will also be on hand that was in the The Dark Knight movie. The Batmobile will be exhibited throughout the weekend for fans to see on the stand Sky there on the grounds of Silverstone. A driving display will be put on by the Tumbler for fans to see Batman’s wheels in action.

Eric Boullier, Lotus F1 Team principal said, " This season we are the 'dark horse' of Formula 1, so this partnership with "The Dark Knight Rises" is perfectly fitting.The E20 has a great look with this marking Batman and we look forward to see the reactions of fans this weekend at Silverstone. Of course, we also expect an epic conclusion to the Dark Knight Rises E20 at the Grand Prix. "

According to Wikipedia, on 29 November 2011, the team announced that Kimi Raikkonen would race for them in 2012 as he returned from a two-year stint away from Formula One which he spent competing in the World Rally Championship he signed for two years (and a third year option) . On 9 December 2011 the team announced that GP2 Series champion Romain Grosjean would race alongside Raikkonen.

The new film from Warner Bros., "The Dark Knight Rises," is directed by Christopher Nolan and stars Christian Bale, Anne Hathaway, Joseph Gordon-Levitt, Tom Hardy, Morgan Freeman and Marion Cotillard. The movie will be the conclusion of the trilogy Dark Knight. The Lotus F1 Team decked out in their Dark Knight gear should be fun for the fans to see and a great way for Warner Bros. to promote the upcoming film.

"The Dark Knight Rises" will hit theaters in the U.S. on July 20.