The new-generation Nissan Frontier isn’t here yet, but when it arrives, you could see this new feature on the mid-size pickup.
Advertisement

The 2018 Nissan Frontier is highly-anticipated and it’s coming soon. Before it arrives, Nissan has launched a new safety system for their new vehicles and the new-gen Frontier mid-size pickup could get it too.

Nissan recently tested the technology on public roads in the U.S., and put media members behind the wheel of some of their vehicles this week. It’s called ProPILOT and it’s used to lessen driver fatigue by reducing the hassle of stop-and-go driving. The new safety system controls acceleration, braking and steering during single-lane highway driving.

If you’ll be using the new Frontier for commuting, you will want this new driver-assist feature. It can potentially reduce driver fatigue and “create a more confident driving experience” especially if you commute in heavy highway traffic every day.

How does ProPILOT work?

ProPILOT Assist uses a forward-facing camera and radar, sensors and electronic control module to help the driver stay in the center of their lane and to maintain vehicle speed (set by the driver) or help maintain a gap to the preceding vehicle if the vehicle speed drops below the driver-set speed. It can slow the vehicle to a complete stop and holds the vehicle during traffic jam conditions.

"hands-on" rather than “self-driving"

Nissan says it’s a "hands-on" driver assist system rather than a "self-driving" feature. While providing steering assist, reducing the need for constant small steering adjustments, the driver's hands must be on the steering wheel at all times. Hands-on detection is provided by the system's steering torque sensor. If the driver only grips the steering system with a light touch, the warning system may activate, alerting the driver to apply more pressure or a tighter grip on the steering wheel. 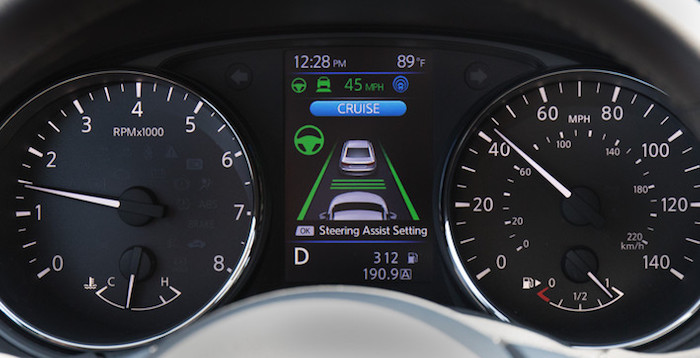 Drivers get distracted easily during slow, heavy city traffic and this is when a rear-end collision occurs. Automakers like Subaru, say their goal is to eliminate accidents like these with their auto-braking systems. In Japan, it’s been proven to decrease rear-end collisions by 80 percent.

Nissan says they will extend this technology to more models in Europe, Japan, China and the United States soon. The Renault-Nissan Alliance will launch 10 new models by 2020 and all will come with the new safety system. The Nissan Serena is the first model produced to feature ProPILOT Assist technology, and it will be joined by the European model Qashqai in fall 2017. Look for the new-generation Nissan Frontier to get it sometime after it arrives. Stay tuned.

Reader Poll: Would you want ProPILOT on your new Frontier pickup?

Wayne wrote on July 30, 2017 - 10:26pm Permalink
No! Drivers actually get distracted more when all of those alarms and lights and buzzers start going off which directs one's focus inside the vehicle instead of concentrating on what's going on outside. Especially when it's dark and raining the last thing I need are lights flashing inside my vehicle when visibility is low to begin with. This is really stupid because, young people especially, will get a false sense of security that they will be safe to text and drive because the "the alarm will sound and the car will brake itself if I don't look up in time ". Not to mention that computer sensors never ever malfunction or go bad. Dumb idea Nissan!
Denis Flierl wrote on July 31, 2017 - 6:17pm Permalink
Most automakers will offer this type of safety system. It's nice to have it as an option and you don't need to buy it! Thanks for commenting Wayne!