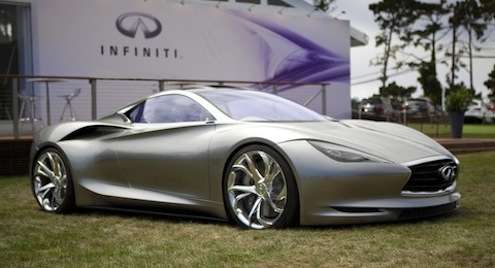 Infiniti has been a sponsor of the Pebble Beach Concours d’Elegance event that has over 100 years of history. The Japanese automaker has brought a number of new cars to show off what the future at Infiniti will look like. The Infiniti Emerg-e Concept is one of those vehicles.

The Infiniti Emerg-e Concept is not your average electric vehicle. The Emerg-e Concept is a true supercar and will excite anyone who loves high-performance vehicles. The mid-engine sports car will make its U.S. debut this weekend at Pebble Beach for performance enthusiasts to see. Infiniti has had a presence at the event for many years and this year will be special as the Japanese automaker brings the most advanced concept ever to the town near San Francisco.

The Emerg-e Concept was launched in Geneva and immediately got the attention of the automotive world. This is the first mid-engine designed cat that the Infiniti brand has produced and takes the company in a completely new direction. The hot new sports car combines supercar performance with the technology of electric propulsion.

Infiniti says the 402-horsepower mid-engined, twin electric motor-powered Emerg-e will sprint from 0–60 in just 4.0 seconds, and from 0-130 mph in “a single, seamless 30-second burst.” And accomplishes this by operating in a a zero-emission urban transport over a 30-mile range.

The electric supercar was engineered in Britian and uses a Lotus Evora platform. The twin-electric motors connect to a single speed (XTRAC) transmission to create an open differential that is able to reduce driveline friction and increase efficiency significantly. A lithium-ion battery mounted behind the seats captures and stores the regenerative energy from the brakes for battery only use. The battery can be recharged via a domestic supply or a fast-charge set-up.

The Emerg-e Concept vehicle uses a Lotus engineered three-cylinder 1.2-liter gasoline engine for its range-extending role. The high-performance suprcar is super-lightweight and uses an aluminum chassis and carbon fiber body, which provides a 20-percent strength-gain in tandem with a 50-percent reduction in weight compared to the sheet molded composite used in most sports cars.

Infiniti will be showing a number of special vehicles in addition to the stunning Infiniti Emerg-e, including the Infiniti LE Concept luxury electric vehicle, the Red Bull Racing Formula 1 showcar, and the all-new 2013 IPL G Convertible. The stable of Infiniti vehicles is being shown at the Infiniti Moments of Inspiration display located at the top of Peter Hay Hill.

For those who like high-performance cars, the all-new Infiniti Emerg-e Concept shows that the future of environmentally friendly vehicles doesn’t have to be boring.

Other Infiniti Emerg-e articles :The supercar of the future is here: Infiniti EMERG-E [Video]

Watch the Infiniti Emerg-e video below.