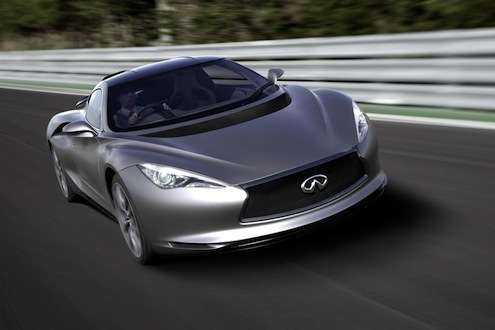 The supercar of the future is here: Infiniti EMERG-E [Video]

Infiniti is unveiling their fully-functional mid-ship sports car of the future, EMERG-E, at the Goodwood Festival of Speed this weekend.
Advertisement

When Infiniti launched the EMERG-E concept car at the Geneva Motor Show earlier this year, it drew an incredible amount of interest from the automotive community. Everyone was surprised to see Infiniti bring out a hot looking mid-engined supercar. And to go even further, the car was engineered in Britain and runs on a Lotus Evora platform. This weekend, Infiniti is unveiling a full-functional EMERG-E at the Goodwood Festival of Speed for the world to see.

Infiniti worked closely with the UK government's Technology Strategy Board initiative, whose aim is to speed the arrival of low-emission vehicles. The Emerg-E is the first Infiniti to have been developed in Europe and its advanced technology deliberately draws on suppliers beyond Infiniti's usual base in "the quest to uncover the most innovative hardware and technical know-how today." says Jerry Hardcastle, Vice-President Vehicle Design and Development, the Nissan Group Technology Centre Europe and Chairman of the UK's Automotive Council.

But the EMERG-E is not just your average low carbon vehicle. The car from Infiniti is a forerunner of what supercars of the future will look like. And that future is exciting. "This is a collaboration of UK companies in order to demonstrate low carbon vehicle potential," continues Hardcastle. "We took a Lotus Evora platform and together with Lotus we replaced their standard powertrain with a new range-extender electric version, specially developed for EMERG-E. It's a stunning looking car and it just shows that an electric car doesn't have to be boring."

The EMERG-E is anything but boring

The EMERG-E is a true supercar and would excite anyone who loves high-performance vehicles. The mid-engined car comes with twin electric motors generating 402 horsepower. Infiniti says the EMERG-E is capable of accelerating from 0-60 mph in just four seconds, and from zero to 130 mph “in a single, seamless 30 second burst.”

These motors are mated to a single speed (XTRAC) transmission to create an open differential that is able to reduce driveline friction and increase efficiency significantly. Four inverters control the motors and their energy regeneration under braking. The recovered power is directed to a lithium-ion battery mounted behind the seats.

The EMERG-E uses a Lotus engineered three-cylinder 1.2-liter gasoline engine for its range-extending role. The supercar has a zero emission urban 30-mile range before the range-extender engine works in concert with its twin electric motors. The battery can be recharged via a domestic supply or a fast-charge set-up. The supercar from Infiniti, is lightweight and uses an aluminum chassis and carbon fiber body, which provides a 20-percent strength-gain in tandem with a 50-percent reduction in weight compared to the sheet molded composite used in most sports cars. The weight of the sports car contributes to its excellent performance on the track.

The performance of EMERG-E will be demonstrated this weekend at the Goodwood Festival of Speed as professional Infiniti drivers take on the famous hillclimb route on Friday and Saturday before Red Bull Racing Formula One driver Mark Webber gets behind the wheel on Sunday.

We are witnessing the future of supercars that will feature environmentally-friendly powertrains like the Infiniti EMERG-E. And the future is exciting indeed.

Watch the Infiniti EMERG-E video below.