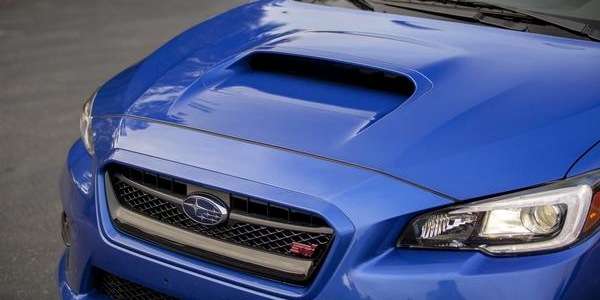 Many WRX STI fans didn’t like the design of the new 2015 Subaru WRX STI. Is Mitsubishi to blame?
Advertisement

Many Subaru WRX STI enthusiasts didn’t think the 2015 WRX STI design looked enough like the WRX Concept that the Japanese automaker dangled in front of fans. When the new 2015 WRX made its global debut at the LA Auto Show last November, it was a huge let down for many WRX/STI enthusiasts. But when you think about the styling, especially the front end, it looks a lot like the 2014 Mitsubishi Lancer Evolution.

Can we blame Mitsubishi for the new WRX/STI styling? It looks like Subaru has taken a page from the popular Lancer Evolution performance car. It isn’t unusual in the auto industry for designers to steal design cues from their competitors, especially when they know the competition is not going to be around. The Lancer Evolution is going to be finished after the 2015 model year here in the U.S. What better way to pick up sales from EVO enthusiasts than to give the WRX STI a similar look?

With the EVO going away after this next year, Subaru would like to pick up those sales from the vacuum left after Mitsubishi goes in another direction. We still don’t know for sure what Mitsubishi will do, but it looks like the new EVO successor will have an electric or hybrid drivetrain and a new name to go with it. Will Mitsubishi fans stay with the new car? Maybe Subaru is on to something here.

Did Subaru want to give the new WRX STI enough of a similar look that EVO fans would make the switch to the new-generation STI? From early indications, it looks like WRX/STI sales are going to be better than expected. In fact, in Australia, they are setting records that go all the way back to 1999 when the first WRX was introduced in Australia.

It could be working because many of those buyers are new to the brand. Nick Senior, Managing Director, Subaru Australia, said: “This is a fantastic response and the most encouraging aspect is the high level of conquest business. New WRX and WRX STI are attracting new buyers to Subaru with their great mix of performance, comfort, value-for-money, specification and Subaru’s trademark reliability.”

We don’t know if those new to the brand are Mitsubishi Lancer EVO fans, but we can bet some of them are. Subaru has always been about not following the leader and getting off the beaten path. But maybe the designers of the 2015 Subaru WRX STI took a page from the Mitsubishi Lancer Evolution.

Other 2015 Subaru WRX STI stories of interest.
2015 WRX and WRX STI sets record pace down under

osama mohamed wrote on April 1, 2015 - 2:25am Permalink
there is no any similarity between Subaru and Evo other than the small tiny head light from front and its nowadays fashion in cars. lexsus is making big black grill from front are we allowed to say they are copying evo too??