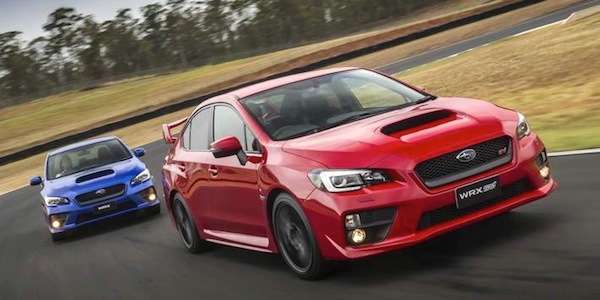 2015 WRX and WRX STI sets record pace down under

This kind of excitement from the Subaru performance models hasn’t been seen since 1999 when the first generation WRX was first introduced in Australia. WRX/STI sales in April represents a 466.4 per cent increase over the same month last year. Many in the media speculated that Subaru fans wouldn’t take to the new design of the WRX/STI, especially now that the performance model only comes in a sedan body style. But that was a wrong assumption.

Subaru performance fans are snatching up the 2015 WRX/STI in record numbers. And it looks like many of these new buyers of the Rex are new to the brand. Nick Senior, Managing Director, Subaru Australia, said: “This is a fantastic response and the most encouraging aspect is the high level of conquest business. New WRX and WRX STI are attracting new buyers to Subaru with their great mix of performance, comfort, value-for-money, specification and Subaru’s trademark reliability.”

For those who have driven the new WRX/STI, it’s not a surprise that the new 2015 WRX/STI is selling in record numbers. The new sports car from Subaru delivers an exceptional level of performance over the outgoing model. It offers improved handling due to the new upgraded suspension, WRX gets a bump in horsepower and a new 6-speed standard gearbox adds to the improved driving dynamics. But the biggest surprise is in the WRX with the new CVT automatic gearbox.

The biggest surprise from the announcement out of Australia, is that the 2015 WRX equipped with the new Lineartronic Continuously Variable Transmission is seeing 50 percent of WRX sales. In the Subaru Australia press release, Senior said, “We’re getting especially strong demand for the sports Lineartronic Continuously Variable Transmission WRX, running higher than anticipated at more than 50 per cent of orders.”

How popular will the new Rex be in Australia? Some 2015 WRX/STI variants are already back-ordered to August. The two new models helped drive total Subaru sales in April to 2903, a 13.7 per cent increase over April 2013 in a market that was down 5.2 per cent for the month. It looks like Subaru has hit another home run with the new 2015 WRX and WRX STI performance sports cars.