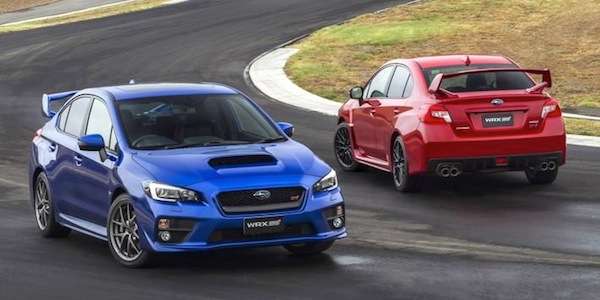 Subaru is expanding their STI dealers and also offering the new 2014 BRZ, 2015 WRX and now the 2015 WRX STI for sale online.
Advertisement

Subaru Australia is expanding their Subaru Technica International (STI) dealer network for performance enthusiasts. Subaru is also offering the new fourth-generation 2015 WRX STI online for buyers. The new STI is the third Subaru model to be offered for sale through buyonline.subaru.com.au, as is the BRZ two-door coupe and also the first 100 examples of the latest WRX to go on-sale in the country down under.

The story comes from Motoring.com.au in Australia and Nick Senior who is Subaru Australia managing director, says the new Subaru STI is only being sold online because they want to reach buyers in remote areas who can’t get tot a dealer. In the Motoring report Senior said, "I expect it to be an extremely small percentage of sales," he added. "It would be lucky to be one per cent to be honest, but it just means someone who lives in a remote area has the opportunity to buy an STI online."

Senior said that The BRZ, WRX and WRX STI sales online are not meant to bypass the traditional Subaru dealer network in Australia. And they will continue to offer those “special” limited production models for sale online with limited availability to customers through web-based retailing.

But Subaru is ramping up their Australia “STI specialist dealer” network who will have dedicated space for their performance models. Subaru has expanded what they call their Subaru Performance Network from 12 to 20 of these special performance dealers. They will also have 17 new performance test centers, which will have new demonstrator 2015 STI that will be available for test drives.

We are sure drivers who want to test drive the new STI will have to prove they are serious about buying the new performance car and not there to just take a joy ride in the four-door sports sedan. Kids who want to take the new STI out would likely be lined up down the block to get their hands on the new Subaru performance model.

These will be the prime performance specialists in the Subaru dealer network and will even have dedicated space in their showrooms for the 2015 WRX STI, 2014 BRZ and 2015 WRX performance models. They will also be required to invest in some specialist technical requirements for their repair techs to know how to work on the performance STI.

Subaru Australia announced pricing on the new 2015 WRX STI. The STI went on sale May 1, with the standard WRX STI starting at $49,990, while a new Premium variant will be priced at $54,990 (plus on road costs). This is $11,000 less than the outgoing model. Performance buyers in Australia will now have more STI dealers where they can purchase the BRZ, and new-generation WRX and WRX STI models.