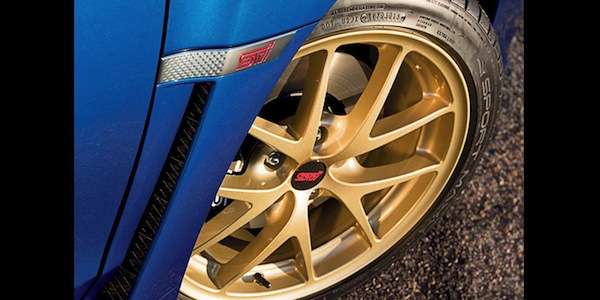 Subaru announces they will give away a new-generation 2015 WRX STI Launch Edition. How can you win?
Advertisement

How would you like to win a new-generation 2015 Subaru WRX STI Launch Edition? Here’s how. Subaru Rally Team USA has teamed up with eBay Motors, who is now an official sponsor, and they want to celebrate by giving away the new performance car to one lucky performance fan. Sounds like a great deal to us.

You can now enter for a chance to win a new-generation rally-bred WR Blue Pearl 2015 Subaru WRX STI Launch Edition. There will also be $100 eBay gifts cards given away to 10 more fans who will be second prize winners. The eBay Motors Sweepstakes starts now and ends August 4.

How do you enter the sweepstakes?

You will need to add your vehicle profile to eBay Garage to be eligible for the sweepstakes which will count as your first entry. You can add photos to your vehicle profile to receive additional entries. If you share your profile images via the social share feature you get 1 more entry per view. You can list your personal vehicle for sale on eBay and receive 1 entry per vehicle listed. You can enter through August 4. The eBay Sweepstakes is valid only to consumer sellers who have listed 6 or less vehicles during the current calendar year.

The winner will get a new 2015 WRX STI Launch Edition that comes equipped with gold-finished forged alloy wheels and the WR Blue Pearl exterior paint that is a combination long associated with Subaru competition rally cars. Only 1000 of the special edition cars are being produced for the U.S. market and Subaru says they are nearly sold out.

One 2015 WRX STI Launch Edition is set aside

But Subaru Rally Team USA has set one of these 2015 WRX STIs aside and will be guarding this Launch Edition sweepstakes car at the team's shop in Colchester, Vermont for one lucky fan. The team will personally deliver the car to the winner as well as host them at a race later this season.

This new relationship with eBay Motors as a sponsor with the Subaru Rally Team USA will give them additional exposure throughout the Red Bull Global Rallycross Championship and Rally America Championship seasons.

eBay Motors will serve as an official source of race coverage photos, driver and series info, race reports and other exclusive content from the team. GRC and Rally America fans can stay tuned to the eBay Motors blog, Facebook and Twitter for all of the latest news from the race teams. eBay Motors will also serve as the presenting sponsor of the team’s popular bi-weekly web video series “Launch Control.”

Here's the link to enter the sweepstakes

Subaru will give away a new-generation 2015 WRX STI Launch Edition in the eBay Motors Sweepstakes to one lucky fan. To enter, fans can visit http://bit.ly/1ods794 until August 4 for a chance to win.

Arnold Beard wrote on July 16, 2014 - 10:17am Permalink
I am a former owner of a Subaru.
Carl wrote on July 16, 2014 - 1:30pm Permalink
Dennis - you have a typo that puts you off by a factor of 10. You said, "Only 100 of the special edition cars are being produced for the U.S. market and Subaru says they are nearly sold out." You might want to pull out your magic editing wand and change that to "Only 1000 of the special edition cars..." And yes, they're almost all gone. As of right now, less than 75 remain available for sale in the whole country.
Armen Hareyan wrote on July 16, 2014 - 3:16pm Permalink
Thank you Carl, I am the editor of TorqueNews and fixed it. Thanks from me and Denis.
Carolyn Florio wrote on September 25, 2014 - 1:55pm Permalink
I Just had my car break down and was stuck until someone could help. have always wanted a Subaru. Never herd a bad thing about them. They are reliable and well priced.