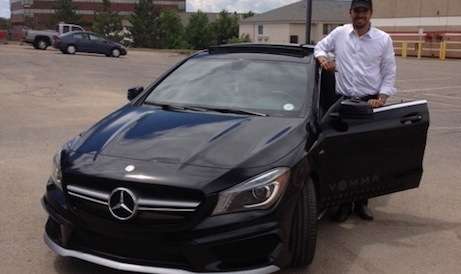 Matteo is only one of three 2014 Mercedes-Benz CLA45 AMG owners in the state of Colorado. This car is hard to get and Matteo had to wait 8 month’s before it was sitting in his driveway. His wife finally agreed he could get one, and the restaurant owner taped a picture of the Night Black CLA45 AMG on his refrigerator dreaming of the day he would take delivery.

Mercedes-Benz of Denver finally called Matteo and told him they had a different color car being shipped soon and asked if he wanted it instead. Matteo was able to get the color changed to Night Black just days before it was being painted in the factory. He finally took delivery of his dream car 3 month’s later.

How did this writer get connected to this rare CLA45 AMG owner?

One Sunday in May, I was working our church parking lot helping get cars parked, and I spotted this Mercedes coming down the street. I recognized that it was a CLA45 AMG and had to talk to its owner, so I stepped into the street in front of the oncoming AMG. Having written about the CLA45 AMG’s performance brake system, I knew the driver could stop before he reached me. Thankfully he did! He rolled down the passenger window and looked at me with a wary eye wondering who would step in front of a moving car. I told him I was a journalist and would like to write a story on his car. He handed me his business card and said “that would be cool.” I could hear the AMG performance exhaust note as he sped away fast.

We connected via email and I told Matteo I had just driven the CLA45 AMG at the track. He asked if I had tried the launch control. I admitted that I didn’t even know it had that performance feature. This 2014 Mercedes-Benz CLA45 AMG owner didn’t know about its "secret" performance feature either until a friend who is a mechanic told him about it. Mercedes doesn’t put anything about “Race Start” in any of their advertising. Matteo looked through his owners manual and found the sequence that it takes to engage the launch control. I met Matteo at his restaurant so he could show me his new CLA45 AMG.

The launch-control program, known as Race Start, will help launch the CLA45 AMG from 0-60 in 4.4 seconds or less. In order to engage the system, Matteo showed me how to push the right buttons, pull the paddle shifters, and push the pedals in the correct order. The 2.0-liter turbo AMG engine spins to 4000 rpm before the clutch hooks up and with the 4MATIC all-wheel-drive, the car launches with minimal tire spin.

We find a quiet stretch of road to try Race Start

Matteo asked me if I wanted to see how it worked, and of course I answered with an emphatic yes! We drove around the Southeast Denver neighborhood until we found a quiet straight stretch of road. Matteo went through the sequence and engaged Race Start. The Night Black CLA45 AMG launched forward, threw us back in the seat and we were off. We did this two times before shutting it down before the neighbors called the local law enforcement. Now that's a great way to spend a lunch hour on a Wednesday!

He gets a few key options to set this AMG apart

Matteo ordered his new CLA45 AMG with a few key options, the AMG sport-tuned exhaust, a sunroof, red interior stitching and the AMG performance suspension with red-painted brake calipers poking through 19-inch AMG 16-spoke wheels. He says he plans on keeping this car forever and thinks it will likely become a collectors car since it’s so rare and exclusive. I have to agree.

On the way back to Matteo’s restaurant, we noticed some dark rain clouds heading our way. He pulled into a secure covered location so he can keep this car clean and safe from the hail that we’ve seen in the area the last few weeks. We walked back to his restaurant still talking about how he loves his first Mercedes, a new Night Black 2014 CLA45 AMG. I can’t say that I blame him, and wish I was driving it back to my office that day.

Thanks to Matteo Mazzullo-Revel for allowing Torque News to feature his story.