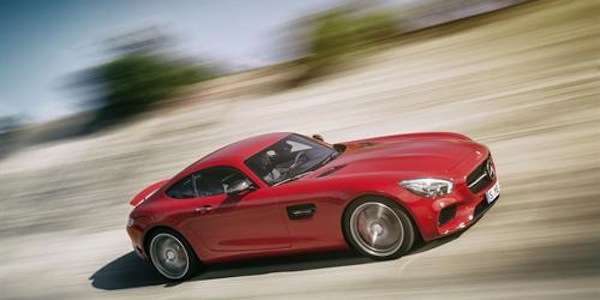 The all-new sports car from Affalterbach, the 2016 Mercedes-AMG GT has been unveiled. Can it compete with the Porsche 911?
Advertisement

The all-new V8 sports car from Mercedes-AMG is here. It’s the 2016 Mercedes AMG GT and it comes in two variants for performance fans. This is the sports car global performance fans have been waiting for, and the two-door coupe is probably the most hyped launch in the history of Mercedes-AMG. This sports car was developed entirely in-house by AMG engineers and comes in two variants with differing power outputs, the AMG GT and AMG GT S. It’s been developed by AMG to compete with the highly successful Porsche 911.

Can AMG GT compete with Porsche?

The Mercedes AMG GT is designed to compete against the Porsche 911 turbo with the turbocharged 3.8-liter six-cylinder engine with direct fuel injection and 520 horsepower. The higher-powered variant Mercedes GT S would take on the Porsche Turbo S with the 560 hp twin-turbo powerplant.

Of course any AMG is developed by performance enthusiasts for performance fans and Mercedes-AMG says, the sports car is manufactured according to the motto 'Handcrafted By Racers', “which perfectly encapsulates our heritage and our spirit." AMG wanted a competitor for the Porsche 911 and it looks like they succeeded. AMG GT comes with an aluminum spaceframe, V8 biturbo engine with dry sump lubrication, seven-speed dual clutch transmission in transaxle configuration at the rear axle, locking differential, sports suspension with aluminum double wishbone suspension and a low curb weight for “ racetrack performance.”

Agile handling on the track

AMG designed the new 2016 AMG GT with a front mid-engine design and rear transaxle configuration that translates to an ideal weight distribution of 47 to 53 percent between the front and rear axle. Add in the sports cars low center of gravity and it should be extremely agile and fast in the corners. With its favorable power-to-weight ratio, the new Mercedes-AMG GT should line up well next to the Porsche 911.

To further increase the performance of the new AMG GT S, the two-door sports coupe will be available with the AMG Dynamic Plus package. Exclusively for GT S, it includes dynamic engine and transmission mounts, that according to AMG, assumes an important function in the case of a transaxle design. The soft mounts improve comfort by providing more effective decoupling of noise and vibration. And handling and agility are improved by an overall stiffer mount set-up.

Pricing will be announced closer to launch

The price tag for the Porsche 911 Turbo and Turbo S is $148,000 and $181,100 respectively. Mercedes-AMG has not release pricing on the new AMG GT and AMG GT S models. It’s reported the new Mercedes AMG GT would have a “significantly lower price tag.” The new 2016 Mercedes-Benz AMG GT should line up well next to the popular Porsche 911 in price and performance. The 2016 AMG GT S will launch first here in the U.S. in the spring of 2015. The AMG GT will launch the following year.