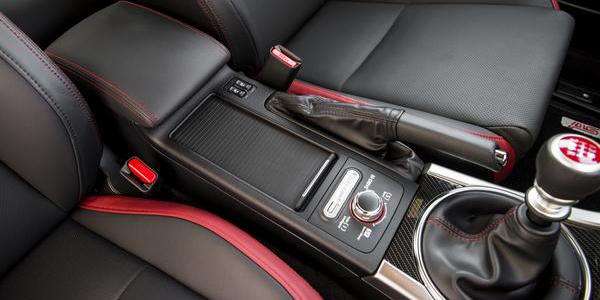 How Could Subaru Seriously Upgrade the WRX STI? Drop in  a DSG [Video]

How could Subaru seriously upgrade the WRX STI? With a new direct-shift gearbox (DSG).
Advertisement

The 2017 Subaru WRX STI comes with only one gearbox, the 6-speed manual rower. It’s a good transmission for performance enthusiasts, but Subaru could take the performance of the STI up a notch with a new direct-shift gearbox commonly known as a DSG. If Subaru wants to seriously upgrade the performance sedan, they should develop a six-speed variant like VW Golf’s DSG.

The gearbox is capable of ultra-fast shifts that even the most proficient user of a manual rower simply can’t match. The first “dual-clutch” transmissions were developed in-house by Porsche for their 962 racing cars in the 1980s. Since then, VW has perfected the unit.

WRX has the “Sport” Lineartronic CVT

Subaru offers the 2017 WRX with their new automatic “Sport” Lineartronic CVT. It’s a good option for new customers Subaru is attracting to the brand. But the high-performance STI enthusiast wants something that will significantly improve the driving dynamics. The STI needs a DSG to realize its full potential. Surprisingly, Subaru says a high percentage of sales of the WRX are with the new CVT. Sales of the WRX STI would also benefit with an automatic. Performance enthusiasts would get the biggest benefit from a DSG transmission option. Here’s why.

The DSG is basically a manual transmission, that happens to be automatically controlled, which is different than a traditional automatic with planetary gears. As explained in the video below from Engineering Explained, a DSG “uses two wet, multi-plate clutches to activate separate drive shafts which send torque via the even or odd gear sets.” In this case, the VW DSG has six gears to choose from.

They explain how the gear sets are on separate shafts, which allows for preselecting the next gear, allowing for nearly instantaneous gearshifts without a total loss in torque. Thus the gear selection can be either automatic or manual, but does not require the use of a clutch pedal as it’s all activated automatically by the electronics unit. It’s a perfect set-up for the STI.

The Volkswagen Golf R uses this DSG transmission, and Subaru would be wise to develop their own direct-shift gearbox for the WRX STI. It would be a serious upgrade as an option for those not wanting to shift gears with a clutch pedal. The gearbox is capable of ultra-fast shifts. Subaru could take the performance of the WRX STI up a notch with a new direct-shift gearbox.

Curt Webb wrote on November 27, 2016 - 2:25pm Permalink
A DSG (dual clutch) transmission is a great idea, but I would bet the farm that Subaru will never develop one. The high development and manufacturing cost would be prohibitive for the small production numbers associated with the WRX and WRX STI. Like it or not, Subaru has committed to the CVT as the only available type of automatic transmission. That may be acceptable to some buyers, but it is a deal breaker for me. Hat's off to VW for committing to the DSG and avoiding the CVT.
Rick LeRoy wrote on March 13, 2017 - 1:38am Permalink
Couldn't Subaru get a dual clutch from another manufacturer? That is what Mitsubishi did with the EVO X and Ralliart (WRX competitor). The EVO uses a Getrag dual clutch, that is the same company that makes the popular DSG for Volkswagen. Look up Getrag on Wikipedia, they make transmissions for Ferrari, the Nissan GTR, 7-Speed dual clutches for BMW M-cars, SLS AMG, they make other transmissions for Fords, Dodges, Volvos, etc. Why can't the STI be on this list??? All these cars have different layouts and drive trains, I don't see what the problem is. Dealing problem? Cost? Weight?
Paul wrote on March 14, 2017 - 7:54am Permalink
I did not realize the Volkswagen DSG was made by a third party. You make a very good point. I will keep my fingers crossed that Subaru explore such an option otherwise when it comes time to upgrade my 2015 WRX in 2019/2020, if Subaru do not have a good DSG, I will have to seriously consider a DSG-equipped Golf R or similar.
SubaStar wrote on November 28, 2016 - 11:04am Permalink
For sure, should Subaru wish to stay competitive on the market, a (reliable) DSG would be a great addition to its WRX STI. Let's wait and see what's they are cooking for us on the next model : 2018 or later ?
Brandon wrote on November 30, 2016 - 12:40pm Permalink
A DSG option, Carbon fiber roof, Carbon Fiber driveshaft, use the FA engine platform (Direct injection is the way of the future), remove the throttle body and remove the cams. We are almost in 2017 the technology is there it's time for STI to step up to the fight the Ford RS and Golf R are providing. They are going the right way with the more rigid chassis and all the safety options but don't forget the STI is supposed to be the performance model. The upgrades I've listed will give the benefit of better performance and fuel economy.
Paul wrote on December 24, 2016 - 10:35pm Permalink
I agree with Curt Webb. Subaru likely could not justify the R&D costs of their own DSG for the small volume WRX/STI lines. They could though buy a third party DSG - some excellent models are available though they are costly. Given the choice of a CVT-equipped STI or DSG-equipped STI, I would much prefer the DSG model and would be prepared to pay a premium for it. The STI also needs a modern engine, the 10+ year old EJ needs to be replaced. If Subaru released a DSG equipped FA25 pumping out 350+ bhp I would put my order in tomorrow.
Hingle McCringl... wrote on January 9, 2017 - 8:30am Permalink
They should have done it the other way around. Used Dsg's for the wrx like lancer did with their ralliart and made a HTCVT for sti's
don wrote on August 22, 2017 - 1:47am Permalink
Subaru's AWD layout requires a different box from that of the EVO style. SO on that matches their current layout would have to be developed
Matt wrote on May 11, 2018 - 11:29pm Permalink
I am a older guy. Wanted to buy one for years but have been waiting for them to jump into the DSG game as I have zero interest in rowing through that gearbox. My son has a 18 STI and I will tell you that when driving lightly around town I am more focused to shifting and shift point dynamics than enjoying the body of work which is a bloody outstanding car that evokes such emotion, it blows the whole experience. I want to take it all in but when beliw boost driving in town the gearbox and attention/awareness it commands ruins it. Full chat driving no issues. My favorite characteristic of the car is the steering wheel feedback. Love that go cart feel.
terry wrote on March 20, 2022 - 11:12pm Permalink
So you want a DSG? Really? They are easily the least reliable gearbox out there. Ask an Audi / VW mechanic. They are notoriously unreliable. Be thankful you have a manual gearbox choice - few cars do.