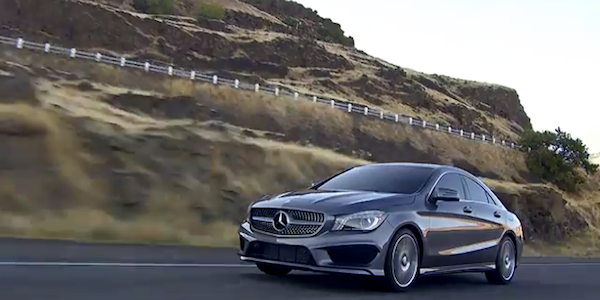 Stuntman Richard Marrero was filming running footage for Mercedes in the new 2014 CLA-Class and everything seemed to be going ok until a potential life-changing accident happened. The Mercedes film crew wanted to finish after a long day of filming and had one more scene they wanted to get before dark. They were filming on a narrow two-lane curvy road and wanted to get some shots of the CLA with its lights on. The sun had already set behind the hills and they were ready.

The film crew had set their camera truck around a curve and were ready to start the filming of the CLA-Class. Richard Marrero set off and the film crew was waiting for the stuntman to come back around the curve and he never made it back. Marrero took a corner a little too tight and hit some gravel on the side of the road. He went off the road and down a hill and rolled the new 2014 Mercedes-Benz CLA-Class.

He walks away from the crash

Richard Marrero miraculously walked away for the roll-over crash without a scratch. He said at the filming of this video, that in stunt scenes, in a crash like this, he would have normally have had a roll cage, 6-point harness, safety helmet, fire suit and a neck brace to keep him safe from injury. He was astonished that he wasn’t hurt while driving a stock Mercedes while just wearing his seat belt. He said, Yea, this car saved my life.”

Mercedes has a strong safety record

The 2014 Mercedes-Benz CLA-Class has not been tested yet by IIHS, but gets high marks from EURO NCAP for safety. Mercedes' strong performance in crash safety is based on its standard safety equipment, which includes a driver knee airbag. Among its other standard safety features, the 2014 CLA carries a new Collision Prevention Assist function; using radar, the CLA can alert the driver of upcoming obstacles when it's traveling at more than 4 mph, and can calculate the amount of brake force needed to avoid an impact.

The integrated collision-warning system has “Volvo-like output,” with visible and audible alerts when you're about to hit someone, or something. Also standard is Attention Assist and its coffee-cup reminder to pull over and avoid drowsy driving. Safety options include adaptive cruise control; blind-spot monitors; lane-keeping assistance; and parking sensors with parking assist.

EURO NCAP gave the new 2014 Mercedes-Benz CLA-Class a 91% adult occupant rating. They said the passenger compartment remained stable even in the frontal impact. Dummy data indicated good protection of the knees and femurs of both the driver and the front seat passenger. Mercedes-Benz provided data which showed that a similar level of protection would be provided to occupants of different sizes and to those sat in different positions. The CLA scored maximum points in the side impact barrier test, showing good protection of all body regions.

Richard Marrero knows just how much standard protection is available on the new 2014 Mercedes-Benz CLA-Class. He credits the new CLA four-door coupe for saving his life as they were filming that final scene in the twilight.

Watch the survival story of this Mercedes-Benz stunt driver who was faced with a potential life changing accident.