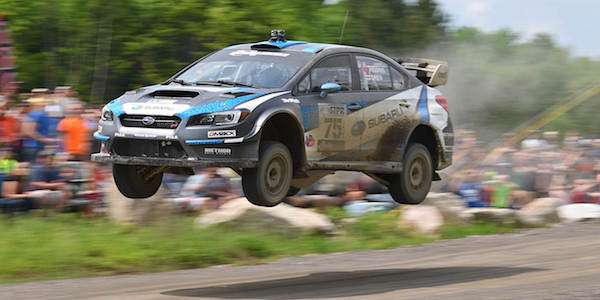 It was David Higgins winning again in the 2016 Subaru WRX STI at STPR. What happened to Pastrana?
Advertisement

Higgins in the #75 2016 Subaru WRX STI was perfect, Pastrana in the #199 STI had a rough weekend. As David Higgins and Craig Drew dominate again and wins Susquehannock Trail Performance Rally in Wellsboro, Pennsylvania, (STPR), Travis Pastrana and Christian Edstrom didn’t do so well. Even though they posted the quickest stage of the rally, they finished with a DNF.

Day one started out good for Pastrana as he won the first stage, but on stage two, he went off on Stage 2. Pastrana and Edstrom lost nearly thirty minutes getting the car back on the road. Higgins and Drew attacked “with expert precision” and their 2016 Subaru WRX STI performed flawlessly.

Day two was not any better for Pastrana

On the first stage of the day (SS5 – Asaph), Pastrana went off the course again and was unable to continue because of damage to the #199 WRX STI. They were forced to retire from the event. Higgins drove his 2016 Subaru WRX STI with precision and won every stage on day two.

Higgins and Drew on some stages of STPR took close to 30 seconds off previous years stage times. Even with their fats times, the championship winning duo were unable to beat the best time set by Pastrana and Edstrom the day prior.

PAGE 2: Why are Higgins and Drew headed to China?

It was the first return to STPR for Pastrana after a seven-year absence from the rally race. Higgins and Drew benefitted from their extensive notes they had from previous years at the rally. Higgins says, “To be fast here you’ve got to trust your notes and not your eyes.” They took a victory here in their last two starts and this made three in-a-row for the SRT USA team.

What’s next for Higgins?

Right after the STPR rally, Higgins and Drew boarded a plane for China. They will drive for Subaru Rally Team China, substituting for his brother Mark who is busy driving the 2016 Subaru WRX STI at the Isle of Man TT course. The Chinese team has two Vermont SportsCar prepared team cars and drive their former car used in 2014 to win the Rally America Championship.