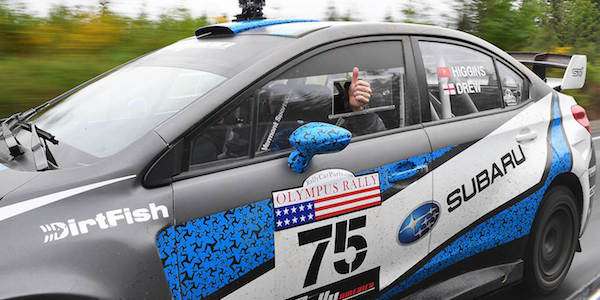 Where was Travis Pastrana this weekend and his #199 Subaru WRX STI? In typical Subaru fashion, they didn’t reveal why Travis Pastrana and Christian Edstrom were not at Olympus Rally. It was Higgins and Drew who ran away with the victory without any real competition from their teammates. The battle during this rally was more with the elements in Washington.

The roads at Olympus Rally are twisty and rough with lots of sharp rocks that destroy tires and machines. After the first set of stages, Higgins said, “That’s hard work!” Tire wear was significant with a full set of rugged DMACK rally tires pretty much destroyed after only 4 stages. In total, nine stages were completed on Day 1 and Higgins and Drew had a comfortable lead going into Day 2.

Subaru driver and defending Rally America Champion David Higgins, with co-driver Craig Drew dominated the Olympus Rally. Higgins lead Round four from start to finish and never looked back. The team said the Vermont SportsCar-prepared 2016 Subaru WRX STI rally car ran faultlessly on the 120 miles of rugged and technical tree-lined gravel stages. Higgins and Drew finished 9:13 minutes ahead of the next competitor, Lauchlin O'Sullivan and Scott Putnam in their 2009 WRX STI.

This is win number two-in-a row for Higgins after a victory last month at Oregon Trail Rally. He moves into the lead of the Driver's championship standings. After the race, Higgins commented from the podium, "This was a great rally, and it's always a huge challenge here at Olympus. The roads are very technical, very demanding. Beside it being hard work for us in the car it's certainly hard on the car too, but again our 2016 Subaru WRX STI was tough, reliable and most importantly very quick."

Up next is Susquehannock Trail Performance Rally (STPR) on June 3-4 in Wellsboro, PA. Subaru did reveal that Pastrana and Edstrom will be back at the event. They will bring competition again to Higgins who cruised to an easy victory at Olympus Rally this weekend in the SRTUSA #75 2016 Subaru WRX STI.