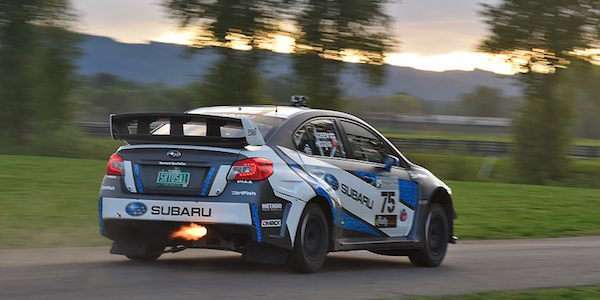 It was a close battle between the two 2016 Subaru WRX STIs, but it was Higgins who came out on top. How much was the margin of victory?
Advertisement

At the Oregon Trail Rally this weekend, it was another intense battle between the two 2016 Subaru WRX STI rally cars. On day one, Travis Pastrana and Christian Edstrom won two stages, with David Higgins and Craig Drew winning the third Friday night. The #199 WRX STI was ahead after the first three stages, but only by half a second over Subaru Rally USA teammates Higgins and Drew in their matching #75 Subaru WRX STI.

The flat out battle between Higgins and Drew and teammates Pastrana and Edstrom continued on day 2 of the Oregon Trail Rally. The two 2016 Open Class Subaru WRX STIs traded off the lead all day as the pair of Subaru drivers fought for stage wins which were often separated by only tenths of seconds.

Travis Pastrana and Christian Edstrom who won the battle last month, had their best stage time on Stage 9 (Goodnoe Hills) and beat Higgins and Drew by 6.7 seconds. This is a scary stage as it has steep 400 foot drop-offs. Edstrom said after the stage, “On stage 9, with the first 1.2 miles of it, we’ll have huge exposure on the co-driver side with 400 feet of drop, that’s where I’ll ask Travis to attack most. Everyone else will be scared to push there." Higgins was attacking too and claimed the lead on the final stage ending day two with a only a 5-second lead.

The battle intensified on Sunday and the two Subaru WRX STIs were again only seconds and sometimes fractions of a second apart on the last day of the three-day event. After stage 12 at Maryhill II, only 0.00.1 second separated the two SRT USA race cars. Pastrana led early in the day and then Higgins put the pedal down and came roaring back.

With two stages to go, Higgins and Drew held a 6.3 second lead over Pastrana and Edstrom. Going into the last round Pastrana picked up valuable time and was behind Higgins by just 4.8 seconds. Higgins wasn’t about to lose again and ran a fast last 10.7 miles at Boyd Loop II and held Pastrana and Edstrom off for the win. The final margin of victory was just 9.5 seconds between Higgins and Pastrana.

It was a close battle between the two 2016 Subaru WRX STIs, but it was Higgins who came out on top. Higgins has now won the Oregon Trail Rally eight times in-a-row and keeps his win streak alive. Next, the teams will head to Olympia, Washington and do battle again at Olympus Rally on May 14-15. Stay tuned.

Tesla Giga Berlin's New Hurdle: It's Not Only the Gov't, but Now Tesla Itself
Teslas Are Sold Out Until 2023, But The Timing May Reverse
END_OF_DOCUMENT_TOKEN_TO_BE_REPLACED