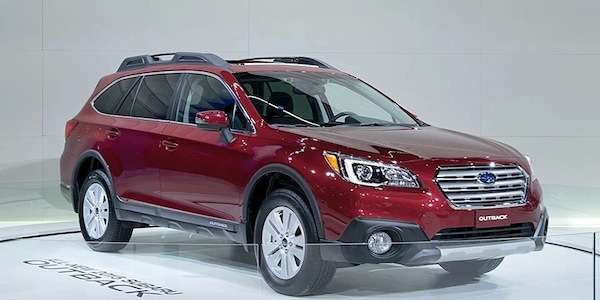 Subaru has always been a niche market automaker, making vehicles that cater to a buyer that wants to get off the beaten path. This brand philosophy is what’s made them so successful in the past. But with the new-generation 2015 Subaru Outback wagon and 2015 Legacy sedan, the Japanese automaker has decided to appeal to a wider audience and has dropped the 6-speed manual transmission here in the U.S. market. Some loyal Subaru Outback and Legacy fans think the brand has made the two new models too mainstream.

Why did Subaru drop the manual transmission?

Subaru went with the new Continuously Variable Transmission (CVT) called Lineartronic in both models. They did this to improve fuel-mileage in both vehicles and it made a difference. The new Outback now gets a 3 mpg gain over the previous generation model and Legacy gets a 2 mpg gain over the outgoing model.

Subaru appeals to a wider audience

Subaru is a niche company in general, and they know how to handle this type of market well, and the Outback in particular is one of their most niche models. Some loyal fans were expecting this trend to be pushed even further, but Subaru designed the new Outback with a broader audience in mind. Most of the reviews have been very positive for both the new Outback and Legacy models, but loyal followers of the brand have expressed disappointment in the overall direction the Outback’s design has taken. It’s because Outback is not as tightly focused as fans used to know.

READ ABOUT: 3 features on new 2015 Outback for adventure seekers

The new Outback wagon and Legacy sedan have grown bigger and have more luxury than ever before. Some fans think the Outback is getting too soft, and dropping the six-speed manual is one area where the Outback has changed in a big way. Some fans feel like not having a manual gearbox takes away from its original sporty character and won’t buy a new Subaru without it. Many of these fans use their Subaru's to go off-road.

But Subaru would argue that the Outback still retains its rugged nature and has better off-road capabilities than in the past with the new X-Mode feature. All 2015 Outback models now come equipped as standard with the X-Mode system, which debuted on the new-generation 2014 Forester. When engaged by a switch on the console, X-Mode optimizes engine output and CVT ratio position, increases Active All-Wheel Drive engagement and uses enhanced control logic for the Vehicle Dynamics Control (VDC) system to reduce individual wheel spin.

Outback and Legacy sales are up

Dropping the six-speed manual transmission hasn’t hurt sales of the Outback or Legacy here in the U.S. And Subaru’s design of the new Outback and Legacy models with a broader audience in mind is working. 60 percent of sales now come from conquests-owners of other brands switching to Subaru. Outback saw its best sales month ever in November and Legacy saw a whopping 97 percent jump in sales over the same month last year.

The new 2015 Subaru Outback wagon and Legacy sedan don’t have a six-speed manual gearbox and many loyal fans are upset. But the brand is experiencing tremendous success and Subaru’s sales gains in 2014 follow seven successive years of sales growth and are being driven by increases across the entire lineup as they appeal to broader audience. Subaru has seen record sales for Forester, WRX/STI, Legacy, Outback and XV Crosstrek. Subaru may have alienated loyal fans by dropping the manual gearbox, but they are seeing record numbers of new buyers who like the brands direction.

Carl wrote on December 13, 2014 - 4:32pm Permalink
The way sales of the Outback are going - with dealers not able to keep them in stock as is - not having a manual transmission hasn't seem to hurt anything. Those people who want a manual transmission can still get a Forester, XV, or an Imprezza manual transmission, especially since the Imprezza is now a Legacy Light anyway. And there's a lot of fun to had with an Outback in X-mode driving through a dirt and mud field anyway. Six inches of good mud was no obstacle.
Ken from OC wrote on December 14, 2014 - 9:52pm Permalink
I have to say that for the first time ever I am considering the new Outback as my next lease in 2015 (the fully loaded 2.5 Limited). And that is after 5 consecutive leases with Honda/Acura. Subaru needed to do make these changes to fully compete in this crowded small to mid size-suv segment.
Parks McCants wrote on December 14, 2014 - 11:07pm Permalink
Didn't we read this article at an earlier date or am I having a senior moment? Hey Ken, why the move away from Acura?
Mack wrote on December 15, 2014 - 9:56am Permalink
Lets see... The old Outbacks were cramped, stiff riding, and completely devoid of luxury and modern conveniences. The new ones are roomy, comfortable, reasonably luxurious, fuel efficient, safe, and full of modern amenities. Who could that possibly offend?