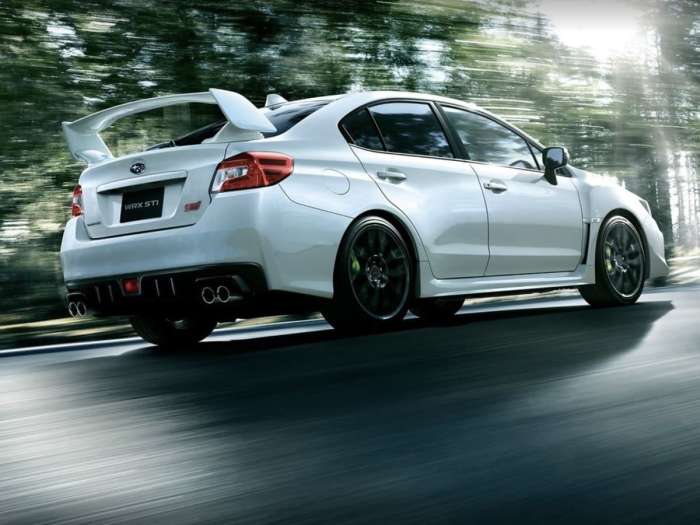 The WRX STI hatch model has been gone for 5 years now, but performance fans still want Subaru Corp to bring back the 5-Door model. Subaru made the decision to ax the model when they introduced the next-generation 2015 model and it hasn’t hurt sales of the sport-tuned WRX or the performance-tuned WRX STI. Does Subaru really need a hot hatch?

Sales of the 2019 Subaru WRX STI sedan are down slightly (-9.1 percent) for the year, but how does the WRX/STI compare with the hot hatchback models, Volkswagen Golf R and the Honda Civic Type R? Subaru of America sold 2,079 WRX/STIs in the month of November and 26,313 of the sedans in 11 months in 2018.

Unfortunately, American Honda does not report individual sales of the Civic Type R. They reported total Civic sales of 21,890 for November. We are just guessing, but if Honda sold around 5 percent (Type R) of the total Civics in November, that would be 1,094 of the hot hatches sold, also considerably less than the WRX/STI. Subaru seems to be doing just fine without the STI 5-Door Hatchback.

According to recent reports, Subaru design chief Mamoru Ishii says the Subaru WRX/STI hatch could be dead. We aren’t sure what Subaru has in mind for the VIZIV (“Vision for Innovation”) concept hatch, but this model hasn’t been approved and likely won’t ever see production. At the Geneva Motor Show, Ishii said: “We don’t have plans to bring back a WRX hatch to the market.”

Many Subaru WRX STI fans still want a 5-Door hatch for its greater utility and cargo-carrying ability. But sales numbers for the Volkswagen Golf R hot hatch and estimates for the Honda Civic Type R suggest the demand for the performance hatch isn’t enough to justify Subaru Corp to build one. Subaru of America is setting records with their all-wheel-drive SUV/Crossover lineup and execs are likely more interested in sales volume than keeping these 5-Door hatch customers happy. We will see when the new-generation WRX/STI arrives in 2020.

SubaStar wrote on December 8, 2018 - 4:45pm Permalink
It's the worst news I read from you Denis… But Subaru is so secret and unpredictable that I still believe (or dream) that a hot hatch might come. Simply because it exists an expending category called "hot hatches" (Golf R isn't the single competitor of the WRX/STI) all over the world and Subaru can't stay out of it any longer...
DeanMcManis wrote on December 10, 2018 - 1:04am Permalink
Subaru without the WRX/Sti? It would be a disaster. Imagine if their longtime rival Mitsubishi just dropped their technical flagship EVO model one day...Oh wait, they did. And now Mitsubishi is barely noticed in the automotive market these days, when 20 years ago their Eclipse, 3000GT, and Evo were right in the running with their competitors, but now all gone. It is true that Subaru also has a ongoing reputation for all-season, AWD cars and CUVs. But at least for me the only two interesting cars that they build are the WRX and BRZ. As far as the Golf R goes, I think that it has an identity problem. The older Golf R had a stout V6 combined with AWD, and it was definitely upmarket from the VW GTi, which was a big seller. Now it still has AWD, but it has a tweaked turbo 4, and starts at over $40K! Most accounts have it as a tourer, compared to the WRX, Focus ST/RS, and Civic Type R. I think that you are underestimating the Civic Type R sales, but like the Focus ST/RS, and WRX, they drive the sales of blander commuter models because they sell the image of the brands not being dull and average automakers. I think that this was a big mistake of Fiat not selling real performance versions of their smaller cars. Not just badge and sticker models without true performance capabilities like these cars offer. It was the WRX's rally performance reputation that got generations of buyers interested in a factory modded AWD, turbo Impreza in the first place. It would be a waste to throw away that important sporting reputation for Subaru.
Paul Cahill wrote on December 11, 2018 - 9:34am Permalink
I think his comparison of the Golf R to the WRX is silly. If Subaru dropped the FA20 into the Crosstek I think they would see a lot of appreciative dad's go that route.
John Goreham wrote on December 10, 2018 - 12:54pm Permalink
As a Subaru brand fan, I'd be sad to see the WRX go. As you point out, the hatch is already gone. Subaru sells about 2,000 WRX cars each month in the US. The real question is why bother with the 300 or so BRZ cars it builds? 0.5% of sales and it's rear-wheel drive. I LOVED driving the BRZ when I tested it, but what has it got to do with Subaru's brand identity? Nothing that I can see.
James wrote on December 10, 2018 - 2:26pm Permalink
Subaru currently has the 5-door Impreza and the sedan is not much different than the WRX. Why can't Subaru dropped the new WRX motor in a 5-door Impreza and make us happy. I could barely get things in the trunk of my wifes '14 WRX and when she got the '16 WRX the truck was a little bit better but its not as useful as a hatch would be. With everything going on the new global platform it shouldn't be that hard for Subaru to offer a WRX hatch.
Paul Cahill wrote on December 11, 2018 - 9:33am Permalink
I agree. If they would have had the FA20 turbo in the Crosstek I would have bought that instead of my 2015 WRX.
Ed wrote on December 19, 2018 - 1:22am Permalink
Why not make it a 600 hp V8 while you're at it? Not! The Crosstrek is great for what it is. It's a budget AWD go-getter economy car I use for work and hauling bikes. As Colin Chapman (of Lotus fame) would comment, more power means bigger suspension, drivetrain, wheels, brakes, etc. Then, it would be a $40K+ heavy car nobody would buy.
KENNETH BRYANT wrote on December 12, 2018 - 12:47am Permalink
If volkswagen would start back putting a stout V6 combined with AWD into the golf r, i would be one of the first to buy one .