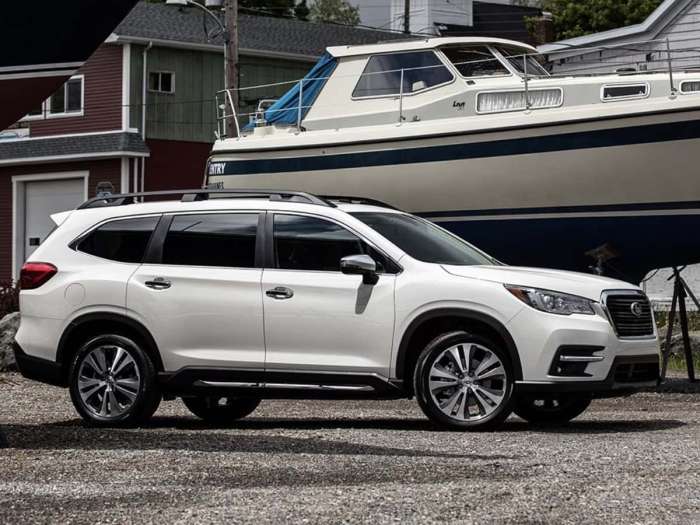 Can A Large 3-Row SUV Be Fun? Subaru Wants You To Believe New Ascent Is

The Subaru Tribeca was a failure for the Japanese automaker. It was an average SUV but it wasn't fun. The 3-Row vehicle had an identity, it just wasn’t the identity that appeals to growing active families who are looking for adventure. The all-new 2019 Subaru Ascent 3-Row is the brand’s new flagship vehicle, the biggest vehicle the Japanese automaker has ever produced, and it’s been infused with the brand’s DNA. But can a 3-Row SUV be fun?

Subaru put the same DNA in the new Ascent that is also in its stablemates, Outback, Forester and Crosstrek. Alan Bethke, Subaru of America's senior vice president of marketing told Automotive News recently, "Subaru has a bit of an identity, and the identity is safety, longevity, and capability. This new Ascent is a Subaru, it comes from Subaru. It gives you all of the brand's DNA that you want." That doesn't sound like all that much fun.

Most large 3-Row SUVs won’t be considered fun-to-drive, but Subaru wants you to think differently about their new Ascent. Fun can be translated in different ways, but a new generation of SUV buyers with families will use the new Ascent for more than a kid and grocery-hauler. They’ll use their 3-Row for outdoor adventures and some will take it off-road. This is who Subaru with their unique DNA is attracting. It offers 8.7-inches of ground clearance, and the lower center of gravity keeps the large vehicle firmly planted on the ground especially when it's off the pavement. It's no fun getting stuck on the trail.

It isn't much fun if your new SUV is in the body shop getting fixed. It's not the sexiest value, but Subaru infused the Ascent with safety. It gets Subaru’s ring-shaped reinforcement frame used in all their vehicles. Subaru's ring-shaped reinforcement frame has been used for more than a decade and has proven very effective in protecting occupants in front and side impacts. Ascent also gets the brand’s EyeSight driver assist system that helps reduce accidents.

It's not any fun making payments or driving a vehicle you don't like. Surveys in different markets around the globe show that 96 percent of Subaru vehicles registered in the last 10 years are still on the road. Subaru has done the best job of any automaker at creating a loyal group of followers, and they tend to keep their vehicles longer. They drive them for years and then pass them down to younger members of the family.

Subaru’s core values are building tough all-wheel-drive vehicles with a “go-anywhere” attitude, the unique horizontally opposed Boxer engine that gives their vehicles a lower center of gravity, and they have one of the best safety ratings of any automaker. Through August, Subaru has already sold 10,721 new Ascent 3-Row family haulers in the U.S. The automaker is fresh off its best U.S. sales month ever, and the new Ascent is infused with the brand’s core values that should make it a big success and more fun to own.

Gofigure wrote on September 30, 2018 - 3:03pm Permalink
My children are all grow but my attraction to the Ascent is the fact that it has lots of room and can tow a decent load. Subaru boasts 5000 lbs. So now i can upgrade my Outback and sell my truck when the time comes because i know the Ascent will tow my boat.