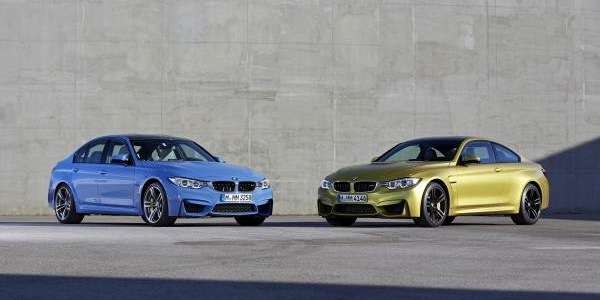 The BMW M3/M4 performance sedan and coupe have been named the most aesthetically pleasing models in the sports car class. What sets the twins apart?
Advertisement

In the most recent readers’ survey conducted by German motoring magazine Auto Zeitung, BMW has won a number of awards. The new BMW M3/M4 performance vehicles has been awarded the most aesthetically pleasing models in the sports car class.

BMW Group design has earned much praise from the Auto Zeitung readership over recent years. Last year, they voted for the all-electric BMW i3 urban car, the sporty BMW i8 plug-in hybrid and the BMW 2 Series Coupe as the winners in their respective categories.

Not the first awards for M3/M4

The BMW M3/M4 made their dealer launch in June of last year and the new sedan and coupe received instant praise. The siblings were immediately sent to first place by readers of trade magazines. Both high-performance models received the “sport auto Award 2014” awarded by “sport auto” and the accolade “Sportscars of the Year” given by “Auto Bild Sportscars.”

Two other BMW models have also won awards this year with their exceptional design in the readers’ survey conducted by German motoring magazine Auto Zeitung. The design of the sporty BMW 4 Series Gran Coupe took the honors in the “Sedans / Station wagons / Vans” category, while the “extrovert use of forms” embodied by the BMW 2 Series Convertible won in the compact class. Elsewhere, the MINI 5-door and BMW X6 ranked among the top most aesthetically pleasing models in the small car and SUV class respectively.

The new M3/M4 models continue to set the benchmark in the segment of high-performance sports cars when it comes to overall concept, precision and agility. These three objectives have been seen in...read more.

The 2015 BMW M3/M4 performance cars are starting out the year with more awards. The new M3 Sedan and M4 Coupe performance machines have impressed both buyers and experts since their launch. When they were revealed at the NAIAS in Detroit earlier this year, it was the beginning of a new era when the twins received a new inline six-cylinder TwinPower turbo engine and a new lightweight design that lowered the weight by 80 kg over the outgoing M3. The die is cast and the siblings are making history.