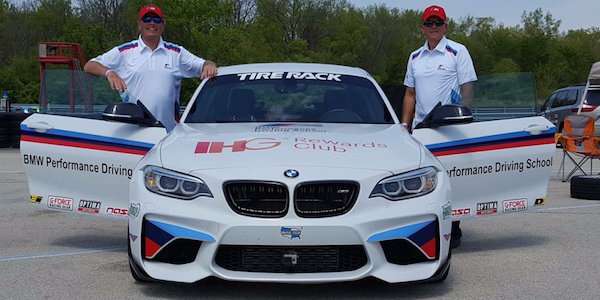 BMW M2 Beats the Competition At One Lap of America

The BMW M2 wins its class at One Lap of America. What cars did it beat?
Advertisement

BMW entered the M2 Coupe at the One Lap of America event and came away with a first place victory. Mike Renner and Steve Maguire drove the new M2 to 1st place in the Stock Touring and SSGT1- Small Bore Classes and 10th overall. The newest M performance sports car was sponsored by BMW M Performance Parts and IHG Rewards Club.

A wild and wacky event

The BMW M2 Coupe competed with vehicles like the Nissan GT-R, Mitsubishi Evo IX, Chevrolet Corvette, Acura NSX and an Ariel Atom. One Lap of America took place in the Eastern and Midwestern US states visiting tracks along the way for the wild and wacky completion.

The event takes place over a period of eight days and covered over 2,800 miles. Competitions include skid pads, autocross and drag racing on six race tracks during the event. One Lap of America brings lots of completion from cars like the Nissan GT-R, Chevy Corvette, Dodge Viper, Porsche of various other sports cars including a 918 Spyder and plenty of other BMW’s.

The 2016 BMW M2 Coupe entered its first-ever One Lap of America competition and wins the Stock Touring and SSGT1- Small Bore Classes. It beat cars like the 2012 BMW 335i, 2007 Mercedes-Benz CLS63, 2016 Scion FR-S and 12 Mini Clubman Retro Car. It’s a testament to the M engineers who developed the new M2 and to Mike Schnell Renner’s driving talent.

Toyota's First EV Will Have a Name of BZ: Toyota BZ
First Videos From Inside The Boring Company's Las Vegas Loop
END_OF_DOCUMENT_TOKEN_TO_BE_REPLACED