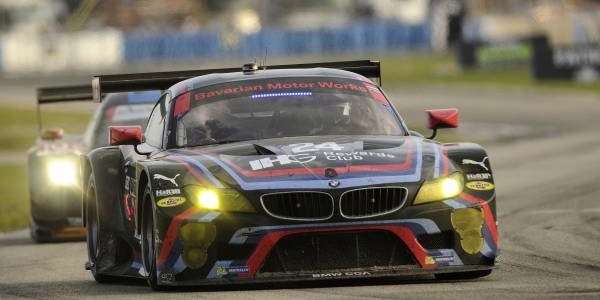 The BMW Team RLL driving the Z4 race cars miss out on a podium finish at the scorching hot 12-hr race. How hot was it at Sebring?
Advertisement

The BMW Team RLL team of Lucas Luhr, John Edwards and Jens Klingmann finished fourth in the GTLM class for BMW Team RLL in the 12 Hours of Sebring. This was the second round of the United SportsCar Championship (USCC) and miss out on a podium finish. The three drivers completed a total of 329 laps with the number 24 BMW Z4 GTLM. The Corvette crew of Antonio García, Jan Magnussen and Ryan Briscoe claimed victory in GTLM.

A hot day at Sebring

It was a hot day at the 12 Hours of Sebring with temperatures of up to 91 degrees, but all the cars compete in the same conditions. The GTLM field was running close for most of the day giving fans plenty of excitement on the hot day. With two hours to go, a yellow flag bunched up the lead cars before entering the final phase of the race. The number 24 BMW Z4 car, with Luhr at the wheel, crossed the finish line in fourth place after 12 hours of racing. The team had a problem with the power steering in the final stages of the race, but were able to finish in 4th.

For the number 25 BMW Z4, the race didn’t go as well and after five and a half hours, Werner entered the pit lane with a damaged front subframe. He was running sixth at that time, and after repairs were made, the team lost more than ten laps, and dropped to the very back of the GTLM pack. Werner, Auberlen and Farfus fought back in the second half of the race and ultimately finishing in eighth place.

CHECK OUT: There's more to BMW M4 DTM than a new livery

Before the race, Hans-Joachim Stuck went out on an honorary lap behind the wheel of the legendary BMW 3.0 CSL. Members of the BMW Motorsport crew from 40 years ago followed in two BMW M4 Convertibles. Among them were Jochen Neerpasch, the first Managing Director of BMW Motorsport GmbH, and Stuck’s 1975 teammate, Brian Redman. In addition, Stuck had the honor of serving as “Grand Marshal” for the event. The BMW Z4 race cars didn’t do as well as the BMW 3.0 CSL did 40 years ago.