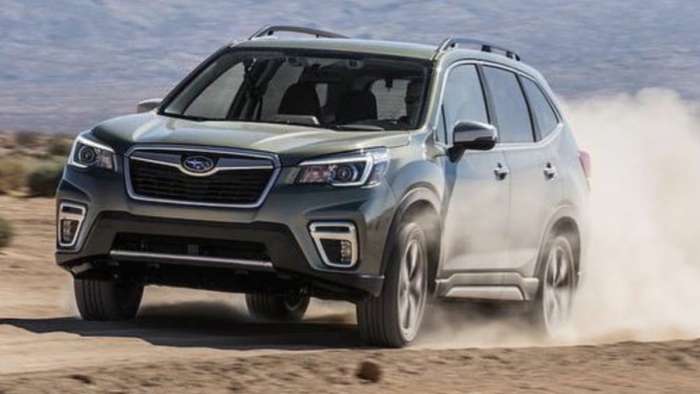 The Biggest Subaru Stories Of 2018; Recalls And Lawsuits Lead All

2018 was a big year for Subaru. They brought out a new 2019 Ascent family hauler and the new-generation 2019 Forester. But it wasn't all good. See what surprising recall and lawsuit stories led the news this past year.
Advertisement

We cover every Subaru story here at Torque News and cover both good and bad. Surprisingly, it wasn’t the new 2019 Subaru Ascent or the next-generation 2019 Forester that were the most popular stories of 2018. They made the top-10, but it was a recall and lawsuit stories that were tops. Here are the biggest Subaru stories in 2018.

Back in October, we wrote about a huge recall affecting several hundred thousand vehicles in Japan and the U.S. because of a faulty engine part. The part was a faulty valve spring on the FB20 2.0-liter engine on the 2012-2014 Subaru Impreza, 2012-2013 Impreza wagon, 2013 XV Crosstrek, 2013 Subaru BRZ, and 2013 Toyota Scion FR-S vehicles. The massive recall affected over 400,000 Subaru vehicles worldwide. This was the biggest story of 2018.

Another story broke in October about the 4th WRX STI 2.5-liter turbo engine lawsuit to hit Subaru of America. This time claiming Subaru dealers installed “secret software” and engines were stalling or surging. It also included the Forester 2.0XT with the 2.0-liter turbo engine. The new lawsuit claimed Subaru repaired 2014-2016 Forester 2.0XT (2.0-liter turbo), WRX and WRX STI 2.5-liter turbocharged engines by “de-tuning” the engines in an attempt to fix the damage that had already been done. This was the second most read story in 2018.

Loyal owners and fans were not at all pleased when Subaru Corp decided the all-new fifth-generation 2019 Subaru Forester would no longer be available with a turbo option. It’s a niche product, but slower sales were not really the reason why Subaru axed the popular Forester 2.0XT. Subaru said they think the new 2019 Forester is sporty enough. Tomohiro Ishitobi, Subaru Corporation’s senior general manager for sales and marketing division said “We have prepared a different type of engine, not just the 2.0-liter that we’re launching this time. But regardless of engine displacement, we focused on engine response, it’s the key thing we focused on.”

The Subaru Forester 2.0XT was not the only model Subaru dropped from the lineup. Subaru also axed the WRX STI five-door hatch after the 2014 model year. Both the STI hatch and Forester turbo were popular models and fans want them back. Performance enthusiasts want the hatch body style for its greater utility and cargo-carrying ability. So far, Subaru has not listened and there are no plans to bring the STI hatchback or the Forester 2.0XT.

Subaru launched the all-new 2019 Forester riding on the new Subaru Global Platform in late September 2018, and fans were wanting to know about it before details were officially released. We broke the news in late December 2017, that the Forester 2.0XT would be dropped along with the 6-speed manual transmission gearbox when the new model arrived. This carried over to 2018 and was one of our most popular stories.

Performance fans are looking forward to the next-generation Subaru WRX STI that launches in 2020-2021. Subaru Corp and Subaru Tecnica International (STI) are working on the all-new fifth-generation 2020-2021 WRX STI now and it will get many new improvements. We talked about five upgrades performance enthusiasts would like to see. Will also talked about one upgrade they wouldn’t see.

Subaru launched the all-new 2019 Ascent family hauler in the summer of 2018. It was an instant success and pre-orders for the 3-Row Subaru were better than expected. We heard from one Subaru dealer, that they pre-sold their entire allotment of new Ascent vehicles in the first month. Subaru is set to sell over 60,000 Ascent 3-Row all-wheel-drive vehicles in the first year.

The fifth-generation Subaru Outback doesn’t launch until late 2019, but Outback fans want to know about it. There are some significant changes coming on the newly-remodeled 2020 Outback SUV/Crossover. It gets the new Subaru Global Platform and will come with increased rigidity in the body and chassis translating to improvements in ride quality and handling, in addition to less noise and vibration in the cabin. Fans wanted to know more before official details are announced and it was a top-10 story in 2018.

Watch Subaru prove its AWD capabilities in the ocean

It surprised beachgoers who couldn’t believe their eyes when they saw a Subaru Legacy GT owner drive his all-wheel-drive vehicle right into the waves. The car had no trouble surfing the waves as the driver went for a spin in the ocean, made a U-turn and drove back the other way. After a few minutes of fun, he drove out onto the beach as nothing strange happened. We can’t imagine what that salt water did to his chassis. Check out the video we put on that story here.

Another 2019 Subaru Forester story was in the top-10 for 2018. With the new Subaru Global Platform underpinning the small SUV, fans wanted to know what difference it would make. We talked about the improved driving dynamics and the upgraded safety technology coming on the new Forester. The fifth-generation 2019 Subaru Forester was the only model to have two stories break the top-10 for 2018.

larry shumberland wrote on March 7, 2019 - 1:30am Permalink
Subarus suck so bad! I hope they keep getting sued, their products are inherently faulty, as an SOA employee I know this first hand.
Bill Lapp wrote on March 7, 2019 - 3:02pm Permalink
I just had a recall WUA-86 on my 2018 Subaru Crosstrek. What bothered me was the service people indicated company policy they couldn't give me a written list of the symptoms they were trying to address. Yes they were glad to verbally read out the 17 problem areas. No they wouldn't give me a printed list. So you're making changes to the function of my personnel property but can't document the changes or even the symptoms being addressed ???
David M Holmes wrote on April 9, 2019 - 7:15pm Permalink
I have a 2018 impreza at the dealer right now having the engine replaced at only 11k miles. We paid for this car in cash brand new, was all of our savings. Now are very concerned that the next engine will do the same.