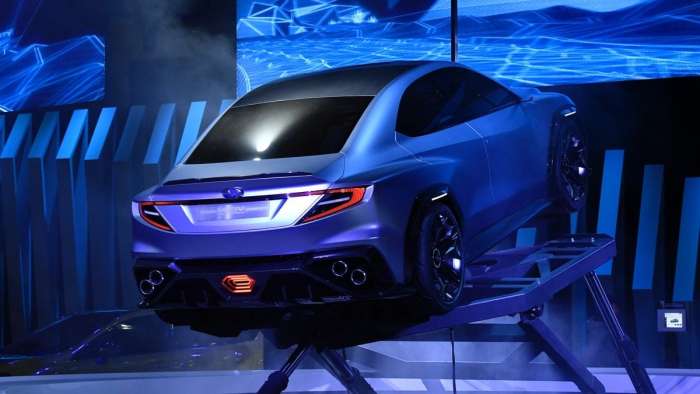 4 Upgrades You’ll See On The Next-Generation Subaru WRX STI, One You Won’t

Subaru will launch the all-new WRX STI in 2020 but it needs significant upgrades. There are five upgrades that will keep performance fans happy.
Advertisement

Subaru Corp and Subaru Tecnica International (STI) are working on the all-new fifth-generation 2020-2021 WRX STI now and it will get many new improvements. Here are five upgrades performance enthusiasts would like to see. Will fans get what they want, or will they be disappointed when the new STI launches in 2020?

A new updated Direct Injection Turbo (DIT) FA20 2.0-liter boxer engine is an option and would get fans excited again. Subaru Tecnica International could easily upgrade the internals, bump up the horsepower (330+) and increase torque and even improve fuel mileage over the aging EJ25 boxer. We know it’s coming with the new Subaru Global Platform with improved driving dynamics, so more hp and torque will work nicely in the new architecture. Subaru Corp will likely drop the EJ25 in favor a new Boxer powerplant which will be the best improvement to the STI they can make.

The 2019 Subaru WRX STI comes with only one gearbox, the 6-speed manual rower. It’s a good transmission for performance enthusiasts, but Subaru could take the performance of the STI up a notch with a new direct-shift gearbox commonly known as a DSG. If Subaru wants to seriously upgrade the performance sedan, they should develop a six-speed variant like VW Golf’s DSG.

The gearbox is capable of ultra-fast shifts that even the most proficient user of a manual rower simply can’t match. The first “dual-clutch” transmissions were developed in-house by Porsche for their 962 racing cars in the 1980s. Since then, VW has perfected the unit. This is the upgrade Subaru won't make because they are committed to the CVT.

It won’t excite performance fans, but Subaru could decide to drop a Sport Lineartronic CVT automatic transmission with paddle shifters in the next-generation model. The Japanese automaker has a goal to be the overall safety leader and all models will need to come standard with their EyeSight driver assist. Subaru engineers have not been able to make EyeSight work with a manual gearbox. Subaru UK boss Chris Graham said: “I’m not sure Eyesight is compatible at all with a manual gearbox. My gut tells me it will be Eyesight with Lineartronic long term.”

Subaru has also said they have designed the WRX STI for one specific market segment. In an interview recently with Motoring.com.au, Subaru’s WRX project general manager, Masuo Takatsu said the brand’s performance fans “simply aren’t interested” in an automatic in the higher output STI.

Takatsu went on to say, “At this point, we don’t have any plans to release an automatic version as STI customers tend to be more people that are into motorsports, and for those customer bases, we believe a 6MT (six-speed manual transmission) is the best choice.”

We’ve covered bringing back the 5-Door hatch to the WRX STI since it was dropped in 2015, and many performance enthusiasts still want it. Subaru fans want the hatch body style for its greater utility and cargo-carrying ability. The new-generation STI could also use a hatch body style to compete with the new Honda Civic Type R, and Volkswagen Golf R hot hatches. It does have its place in the WRX STI lineup and would make many fans happy. Even though Subaru has not confirmed they will bring back the 5-Door Hatch, we are betting they will.

The all-new fifth-generation Subaru WRX STI needs a new exterior design language similar to the VIZIV Performance Concept car introduced at the Tokyo Motor Show shown above. Subaru is great at teasing concepts that are off the chain and then delivering something very generic for the actual production car. Of course, the final production model won’t look exactly like the concept, but it gives performance enthusiasts a good idea of what the designers at Subaru Corporation have in mind for the future direction of the new performance model. Subaru needs to get more aggressive with the new 2020 design.

Updated tech and materials inside the cabin

The 2018 model refresh brought updated cabin materials, but they're still not up to snuff for a car with a price tag that pushes $40,000. Subaru needs to catch up with the Honda Civic Type R and Volkswagen Golf R in terms of materials and design. The back seat is especially sparse, with no power ports or climate control vents for rear passengers. Look for significant upgrades to the WRX/STI interior.

Subaru’s new Subaru Global Platform (SGP) will make a big difference, and the 2020-2021 Subaru WRX STI will get new underpinnings. It will ride on the new more rigid architecture, have an even lower center of gravity, and it could be lighter with the use of carbon fiber parts in the bumpers, fenders, and roof.