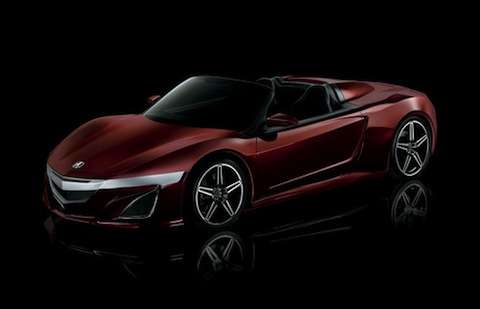 Acura and Marvel Entertainment, LLC, announced the details of their promotional campaign for this summer's most anticipated film, Marvel's The Avengers. A one-off Acura NSX Roadster was created specifically for the film.
Advertisement

Acura is the automotive sponsor for Marvel Studio's upcoming movie The Avengers, and will feature a one-off convertible version of its 2015 NSX sports car. Honda says the car was specifically created for the film, but it shares much in common with the NSX hybrid coupe concept that was first revealed in January at the Detroit motor show.

Acura released an image of the new roadster from the movie identifying it only as "an Acura convertible sports car". An NSX roadster has been rumored, but has never been confirmed by the Japanese automaker. Now, Honda is hinting that a rag-top edition of the new hybrid performance car is under consideration for production. Acura is possibly using the appearance of the roadster in the movie to gauge interest in the car and determine whether to build a production version.

The Acura NSX concept that is reported to begin production within three years, features new hybrid Super Handling-AWD (SH-AWD) system. A V-6 engine brings power to the rear wheels and is be mated to a seven-speed dual-clutch gearbox. The front wheels generate power by a different means, by way of a pair of electric motors. Each motor drives a different wheel and the system has the ability to accelerate the outer wheel in a corner, improving the cars cornering ability considerably. The V-6 engine with the electric motors is expected to produce close to a combined 400 horsepower.

The Acura NSX Roadster if it does come to production, will most likely be powered by the same Acura Sport Hybrid Super Handling All-Wheel Drive system as the hard-top. Fans of the roadster will likely not see the roadster anytime soon however. If Honda does decide to build a convertible NSX, it’s not expected to enter production until sometime after the coupe, potentially later in 2015 or 2016.

To coincide with the announcement, the automaker used this week’s 2012 New York Auto International Show to present a S.H.I.E.L.D.-enhanced MDX. A ZDX and TL are also expected to appear on the big screen.