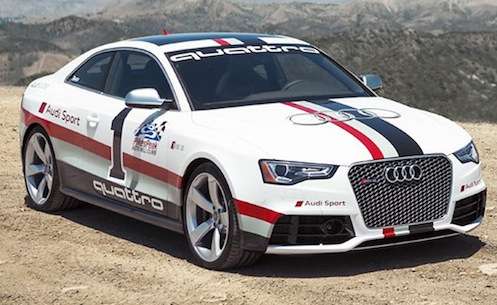 Audi has revealed the special RS5 Pikes Peak racer that was teased earlier in the week by the German automaker with a new Ride and Drive contest.
Advertisement

Audi has announced they are making a donation to, and raising social media awareness for, the Battle of the Blaze fund also supported by the Pikes Peak International Hill Climb. The fund is aimed at providing relief to people affected by the wildfires that devastated communities surrounding Pikes Peak earlier this summer. They also announced the "ultimate ride and drive contest."

Audi teased the new RS5 Pikes Peak racer ahead of the beginning of the race, and today revealed the car. Audi also released a video showing the RS5 along with an entrant to the race from Ducati. Audi says “Audi and Ducati are teaming up at Pikes Peak to celebrate their common heritage at this iconic mountain.” And they say they will give us more information tomorrow.

This years Pikes Peak Hill Climb was cancelled do to the Waldo Canyon forest fire near Colorado Springs and will begin formally on August 12th. Audi is celebrating this years race in a special way by reliving some very important history. 25 years ago, racing legend Walter Rohrl took his Audi Sport Quattro S1 and took his car on a record-setting run up Pikes Peak. He reached the summit in ten minutes and forty-eight seconds.

The Audi Sport Quattro S1 driven by Walter Rohrl still holds the best mark in the pre-paved era. This year, in honor of its 25th Anniversary of the record-setting run, Audi plans to celebrate by reliving some history as both Röhrl and the original 1987 Quattro S1 will climb the course in an exhibition drive.

Audi is expected to have two cars in the Pikes Peak race this year and the RS5 should be an impressive car in the race. While we don’t have specs on the hill climbing version, we do know that the factory model RS5 is powered by a 4.2-liter V8, sourced from the Audi R8, with 444 hp and 317 lb-ft of torque.

The standard version is coupled to a seven-speed S tronic transmission and gets Audi’s Quattro all-wheel drive system. The all-wheel-drive will give the RS5 extra stability and traction for the uphill climb. Audi says the standard RS5 Coupe can accelerate from 0 to 62 mph in 4.6 seconds, before reaching an electronically limited top speed of 155 mph.

We should be getting more specifications on the Audi RS5 Pikes Peak racer as we get closer to racetime on Sunday.

For more details on the Ride and Drive Contest visit: http://www.togetherwetakethehill.com/

Check out the video's below of the Audi RS5 and a Ducati decked out in their Pikes Peak edition trim.