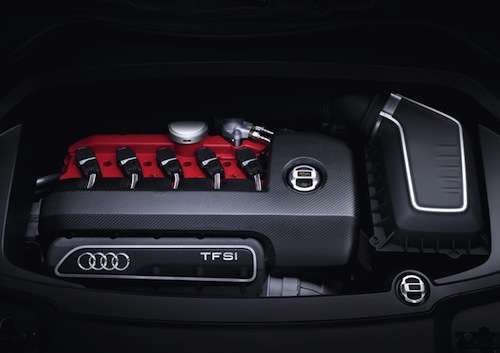 The turbocharger is a very efficient way for automakers to take a smaller displacement engine, and increase both engine performance and reduce fuel consumption. But turbochargers can have a lag in power as they wait for the exhaust gasses to build up. Audi has developed an electric biturbo that will revolutionize the turbocharged engine by completely eliminating turbo lag.

Turbocharging makes a lot of sense because automakers can downsize engine displacement and achieve the same power and efficiency compared with larger naturally aspirated engines. Audi says that their TDI diesel engines have realized power gains of over 100 percent and torque gains of 70 percent since 1989. Over the same time period, emissions have been reduced by 95 percent with the use of turbochargers.

In advanced diesel development at Audi’s site in Neckarsulm, engineers developed this new electric biturbo technology that uses a secondary compressor that boosts the main turbocharger at lower engine speeds. All turbochargers use energy from the exhaust to drive the turbo. The problem with conventional turbo’s is the torque needed for power becomes gradually greater only as the exhaust energy increases.

Audi’s new electric biturbo makes it possible, independently of the exhaust energy available, to build up charge pressure quickly and achieve high levels of torque even at very low rpm’s. This eliminates turbo lag and offers an instant increase in torque and power. The biturbo uses both a turbine wheel driven by the exhaust gas stream, and an electrically driven turbine that accelerates to very high speeds in an extremely short time.

The results of the new Audi electric biturbo are impressive. In preliminary testing, torque buildup occurs significantly earlier, and the driver experiences a distinct boost in performance immediately. Both BMW and Subaru have also been developing their own electric turbochargers with Subaru looking to put the new technology on the next generation WRX engines.

2013 WRX could get game-changing electric turbo

kondelev wrote on September 23, 2012 - 4:49am Permalink
why not use a normal small turbo after the cooler just close to the cylinder head to improve response and the connect the turbo shaft to an electric motor through a clutch mechanism so that when u press the accelerator the electric motor assist the small turbo pick up speed first significantly increasing response at all revs and eliminating lag at low revs!
Booster wrote on September 23, 2012 - 2:31pm Permalink
For 2 main reasons : a/ an electric motor is unable to whistand the temperature of a turbocharger (1000°C), so you cannot make an electrified turbo (copper will melt and magnets will demag) b/ even if this could be made, say remotely, the impeller of a turbo is made to deliver high flow for power at high revs. it is not made to deliver high torque at low revs. You need another impeller, or if you use a high torque low flow impleller then you have a terrible turbo. This is why the only solution is to have a normal turbo together with a remote electric charger. This one could have the proper impeller, be temperature protected and, additionnally , have no lag contrary to a turbo who revs up on exhaust entalphy (there is no available enthalpy in the exhaust at low revs)