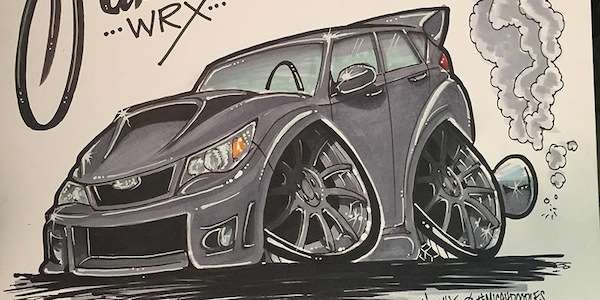 Are you looking for the perfect car enthusiasts Father’s Day gift?

Are you looking for that perfect gift for dad? Micahdoodles has the answer for any father or any gearhead. What special car would you like him to draw?
Advertisement

Father’s Day is fast approaching and here’s a great gift idea that any car enthusiast will love. Micahdoodles can create a drawing of your current car or truck or a vehicle you’ve owned in the past. Send him a picture of any car like the Subaru WRX above and he does the rest.

Micah Claycamp started drawing cars by accident and now it’s turned into a business and ministry. One night after he took his son and friend home from basketball practice, he saw a drawing pad in the back seat that his son's friend had left. Micah took the pad inside and drew him a picture of a truck as a surprise for when he opened it next. Micah decided to share the picture on Instagram and Facebook before going to bed.

He couldn’t believe the response

A few days later he was contacted by a friend who saw the drawing on Facebook and commissioned him to draw 3 different cars. He also put these on social media and received positive comments from everyone who saw them. Micah took another step and got more of his work “out there” to see what would happen. That was just 7 month’s ago, and now he’s already drawn over 90 cars for clients around the country.

How have Micah’s drawings evolved?

He started with a few design markers from when he was at Northern Arizona University. Micah says, “They were ancient and only about 10 percent had any ink left in them, so I made do with what I had. Since I own a 1956 VW Bug, I decided to test them out. The outcome was night and day...there was no going back.” That same friend who had commissioned the first drawings bought Micah new markers and he had the colors he needed.

He received even more orders in the following months and it was turning into a side business. That’s when micahdoodles was born. It was more than just a business for Micah as he wants to honor God with his work. “God had blessed me and I wanted to honor Him in what I did. I knew people were beginning to follow me and like my art, so what an opportunity to share God's Word”, says Micah.

Have you ever sold a vehicle you wish you had back?

I’ve sold a few vehicles I wish I had back like my 1964 Corvette. Here’s a unique way of having a picture of that car and remember it forever. Micah says he has many of these clients, “We all have memories of vehicles we had or wish we still had. Its been fun hearing those stories from people and clients I’ve met.”

Micah’s drawings have evolved and changed over the past few months. Micah went on to say, “Looking back its been fun to see how my style has changed and become more fine tuned the more I drew. As of today, I have over 90 vehicles I've draw. What started out as a gift, has now turned into a business. I truly thank God and give him the glory.”

After you send Micah your vehicle image, he will send you a proof sketch. Once approved, the inking process begins. This usually takes 1-2 hours from start to finish. He even sends text messages with progress pics of your vehicle as your drawing is completed. How much does it cost? $90 per drawing.

You can see more of Micah’s work on his website, micahdoodles.com. If you would like that perfect Father’s Day gift or have a vehicle you own or have owned and want a drawing, let Micah Claycamp design it for you with his unique look.