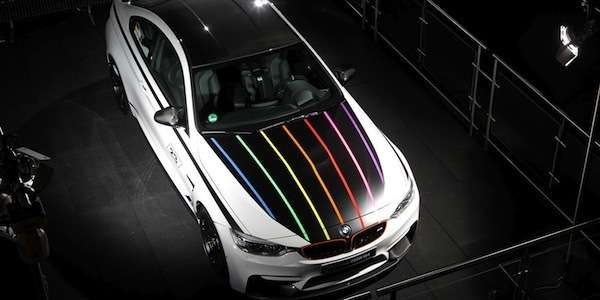 Japan will be getting 5 examples of the Marco Wittmann 2015 BMW M4 DTM Champion Edition model. What sets it apart?
Advertisement

When Marco Wittmann won the Team Championship for BMW Team RMG last year, BMW M GmbH honored his achievements by designing an ultra-exclusive BMW M4 DTM Champion Edition. Wittmann was given one of these road versions of the Ice-Watch BMW M4 DTM after winning the championship.

BMW will only build 23 versions (as homage to Wittmann’s start number) of the M4 DTM Champion Edition worldwide and five of these special models are heading to Japan. The cars come with a special livery and Wittmann likes the look. When the DTM champion driver received the car last year he said, “The car suits me. The colors with the Ice-Watch stripes are striking, just like the design of my championship-winning car. I think the road version of the Ice-Watch BMW M4 DTM looks awesome. It is definitely eye-catching.”

The five Japanese models won’t come cheap and will command a premium over the regular M4 bringing its price to 13,990,000 Yen (about $119,000 USD). Orders are being taken until the end of February and delivery of the special models will be sometime in May.

M4 DTM Champion Edition gets a unique livery just like Wittmann’s Ice-Watch BMW M4 DTM racer. It features matte black across the hood, the roof and the rear deck as well as rainbow colored racing stripes. The number 23 is also included on the doors and the Champion Edition M4 is finished exclusively in Alpine White.

Everything underneath that special liver is the same as the standard M4 model. It features a 3.0-liter TwinPower turbocharged engine producing 425 horsepower and 406 lb ft of torque. BMW M4 will sprint from 0-62 mph in just 4.1 seconds when equipped with the optional seven-speed M double clutch transmission. Top speed is limited to 250 km/h and can be increased to 280 km/h with the optional M driver’s package.

Ice-Watch also released a Marco Wittmann limited Ice-Watch edition in the colors of BMW Motorsport. The face has Marco's signature on it and only a limited number of the watches were made available. There’s no word as to whether any of the watches will make their way to Japan with the five 2015 BMW M4 DTM Champion Edition models.