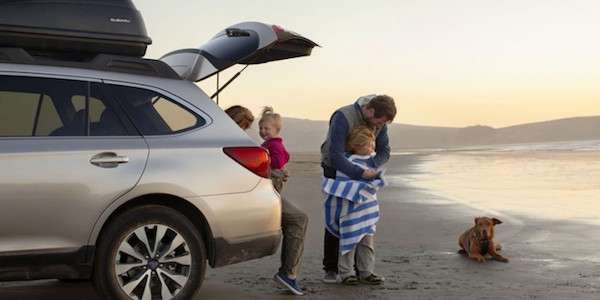 3 Magic Ingredients Subaru Uses to Secretly Motivate You to Buy an Outback; It Goes Beyond Marketing

There’s three secret ingredients Subaru uses to magically motivate you to buy their vehicles. It goes beyond marketing.
Advertisement

Subaru loves pets, Subaru loves your kids and they love the causes that you care about. They are the three magic ingredients they secretly use to get you to buy their all-wheel-drive Outback wagon, Forester SUV and Crosstrek crossover. It’s brilliant marketing and it’s working. Subaru has their ad agency, Carmichael Lynch to thank for much of their success. More importantly, they put boots on the ground to make it happen.

When Subaru decided to deviate from engineering and feature-focused campaigns in 2008 to embrace "Love," an umbrella campaign that focuses on the passion points of Subaru owners, the automaker will post seven consecutive years of record-breaking sales. They are doing something right.

Subaru of America recently kicked off its “Subaru Loves Pets” initiative as part of the brand’s Love Promise platform. Who doesn’t love pets right? Subaru knows more than half of drivers are also pet owners. It’s a cause Subaru knows is close to many driver’s hearts. Yesterday, on Black Friday, Subaru was asking owners to #OptOutside with their dog and stay out of the shopping malls. Earlier this week, Subaru of America provide a fleet of Outback vehicles, with drivers, to take shelter dogs in New York City outdoors for a day.

If someone takes an interest in your kids, you will take notice and respond positively to that person. Subaru of America announced recently it will donate more than 1,700 award-winning science textbooks to 17 Camden, NJ schools, where Subaru has their US Corporate offices. COO Tom Doll, personally delivered the new science textbooks during a ceremony held at Catto Community School in Camden earlier this year.

Subaru loves the causes you care about

Many Americans have had cancer, have a family member who has it, or knows someone who has been sick with the disease. In June, Subaru kicked of their “Subaru Loves to Care” initiative, which literally brought warmth and hope to thousands of patients fighting cancer across the US. Subaru of America and 393 of their dealers, partnered with fifty four LLS chapters across America. They delivered 30,000 blankets to patients undergoing cancer treatment at nearly 250 local hospitals and treatment centers nationwide. This was an extension of Subaru’s Love Promise campaign.

Animals, your kids, and other causes close to your heart, are the three magic ingredients Subaru uses to secretly get you interested in their Forester, Outback and Crosstrek vehicles. Subaru of America takes it beyond the TV ads and gets personally involved in people’s lives. Could this be why they’ve had seven straight years of growth?

mkp1151 wrote on November 26, 2016 - 6:53pm Permalink
I'm sure good marketing helps Subaru sell cars, but one reason stands above all for their seven years of success in America: they build great cars! They are safe, reliable, economical, and fun to drive.